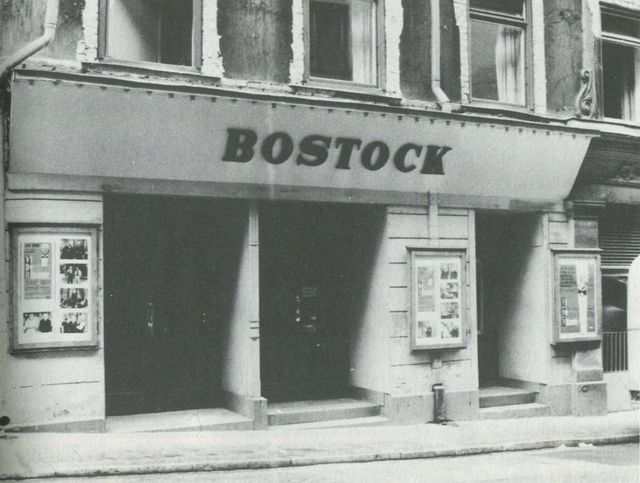 Bostock was the first Swedish outdoors cinema (Filmnyheter, 1924). The short-lived cinema had its opening night on the 15th August 1905 and closed on the 15th October the same year (Walderkranz, 1968). Situated in the courtyard of the then newly opened public indoor swimming pool Centralbadet on Drottninggatan 88, the moviegoers had a nice view of the Art Nouveau style of the surrounding buildings. To keep the area restricted, a wooden fence of 2,5 meters was put up surrounding the courtyard. A wooden roof of 1 meter was erected over the screen with a 45-degree angle, to keep the screen shaded (police report by Holmgren, 1905). Because of warm temperatures and somewhat darker nights, late summer was chosen as the ideal time to screen the films (the Olle Waltå archive).

With 456 seats and room for an additional 200 people standing at the back, prices ranged from 25 öre for a standing ticket, 50 öre for seating, and 75 öre to reserve a seat. Daytime family screenings were also advertised with reduced prices for children. The cinema attracted audiences by showing a Georges Méliès film “The Palace of the Arabian Nights” (“Le palais des mille et une nuit”, 1905), which was hand-coloured and imported from Paris. They also screened actuality movies depicting sporting and royal events, as well as comedy shorts. The popular comedian Brack-Jan also appeared and performed on the stage (advertisement in Stockholms-Tidningen, 1905).

The application sent to authorities implies that Gustav Emanuel Gooes was the founder and owner of Bostock (application by Gooes, 1905). However, later reports indicate that the cinema was run by two or more brothers of the Gooes family (the archives of Olle Waltå). The application was valid until the 31st of October, but due to bad weather Bostock had to move indoors on the 15th, two weeks before the expiration date (advertisement in Stockholms-Tidningen, 1905). The business then continued at a venue on Drottninggatan 71A, where Apollobiografen had been previously situated. The indoor cinema was active for three years (Lindenbaum, 1945). Another cinema named Bostock opened 1905 at another address and stayed active until 1985, not to be confused with the outdoor cinema Bostock (Anders Haraldsson, 2016).

In 1906, the competitor Axel Leonard “Häst-Nisse” Nilsson applied to screen films and play music where Bostock had been located the year before (application by Nilsson, 1906). The cinema, renamed “Central”, was active for two weeks in August. The short life span of Central was largely due to bad weather.