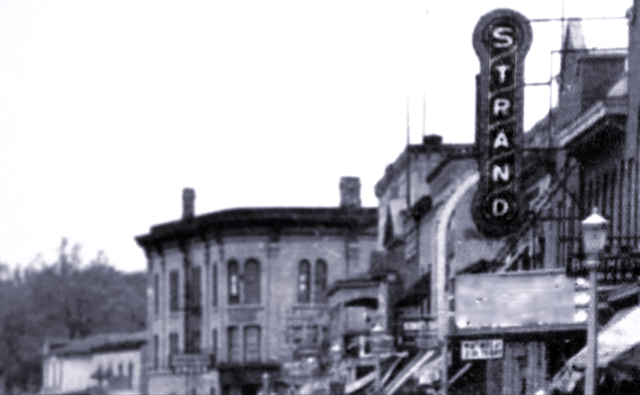 The Strand Theatre was built at 144 E. Wisconsin Avenue in 1920 with its grand opening in 1921. Its main claim to fame was hosting the World Premiere of “The Wizard of Oz” from August 12 through August 16, 1939. The theatre closed under Harry Melcher Enterprises' Unity Theatres Circuit in the 1950’s and was converted to retail in June of 1960 through June 1968. The neighboring bank purchased the building for parking and drive-through banking razing the former Strand Theatre in October of 1969.

Huebner equipped the Strand Theatre with a Vitaphone sound system later in the decade. He sold the theatre to Unity Theatres Circuit under Harry Melcher in December of 1952. Melcher removed the Barton organ and made improvements to try and compete with television. But the Strand Theatre’s days were numbered and the theatre went dormant converting to retail prior to its 1969 demolition.

If the Strand was the only theater opened at Oconowomoc in 1921,, then it was probably this project noted in the December 25, 1920, issue of The American Contractor:

Alfred Charles Clas, previously of the noted architectural firm of Ferry & Clas, had an independent practice in Milwaukee from 1912 to 1932.