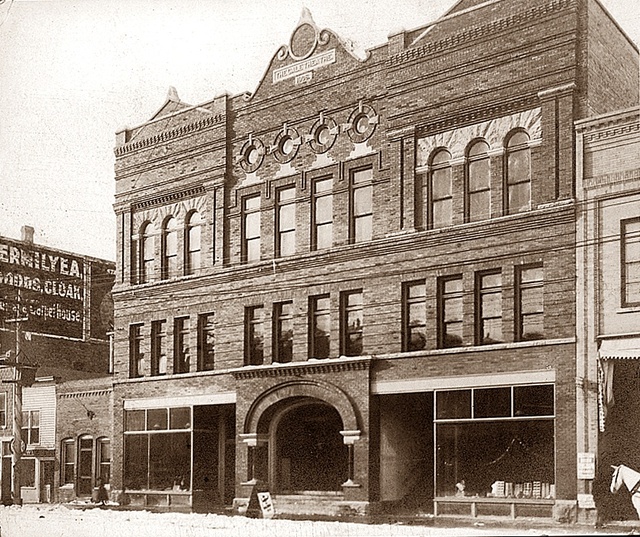 Built in 1906 as the Gale Theatre, destroyed by fire in 1914, rebuilt and reopened as the Metropolitan Opera House in 1915. It was operated as a movie theatre by the Finkelstein & Ruben chain. They were taken over by Publix in 1929 and eventually merged into Paramount Pictures Inc.

The State Theatre was known as one of the showcase theatres of the state, the three-story brick theatre had two balconies, eight boxes, twelve dressing rooms and seating for 1,065.

Until again destroyed by a fire in the early morning hours of Saturday, May 1, 2004, the building had stood under several names – Metropolitan, Paramount and State – for almost 90 years.

In 1952, the theatre was again remodeled and renamed. This time equipped for CinemaScope and 4-channel stereo sound, with new seats and acoustic treatments. The lobby was rebuilt and a new marquee proclaimed the new name, “State”.

The final chapter of this theatre’s life started in approximately 1994 when the Mitchell Area Community Theatre organization purchased it for the pupose of bringing live performance venues back to Mitchell on a regular basis. The group had recently completed approximately $400,000 in renovations and restoration in the month before the fire. “Hello Dolly” was the first and last performance members of the community had the opportunity to see the renovations.

From the 1940s a photo of Mitchell’s Main Street that captured a glimpse of the Paramount Theater along with signs pointing out the direction of the Roxy that was located on North Lawler.

I was working at the Time Theater (tiny 400 seat theater owned by the same company as the Paramount) when they remodeled it and renamed it “State” in 1952. I hated the fact that they covered all the beautiful marble in the lobby with cheap plasterboard or tile to “modernize” it.The place was stunning before they “fixed"it. It seemed fitting to me that they dumped a classy name like Paramount and gave a cheap generic name, “State”. Because it had originally been built for stage shows they still had all the dressing rooms in the basement.

4 photos of the 1914 fire in the below link to the “South Dakota History of Cities, Towns and Places” Facebook page. It’s a Public Group, so if you can access Facebook you should be able to see it.