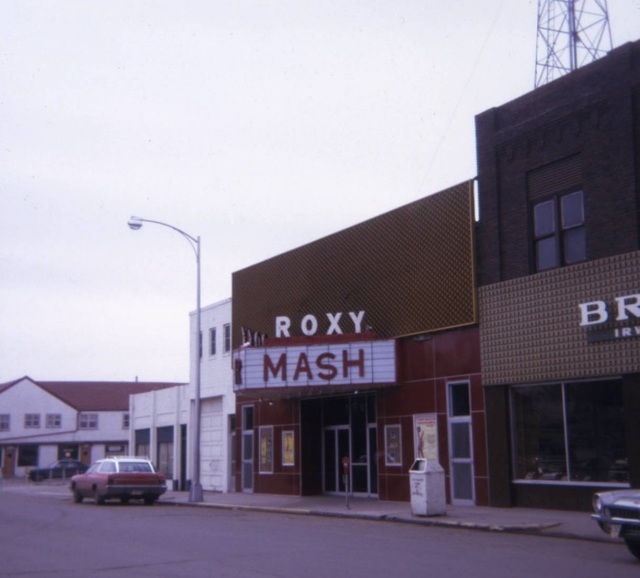 The 600 seat Roxy Theatre was built in 1933, out of the shell of an old garage and is a prominent downtown landmark. In 1989, three new screens were added to the side of the theatre.

Sadly, the Roxy Theatre was destroyed by fire on January 7, 2001. Ironically, only the newer screens survived the fire, with the original lobby and auditorium entirely destroyed.

The theatre has since reopened as a five-screen first-run movie house operated by Logan Luxury Theatres.

http://www.loganmovie.com for information and possibly pictures of the roxy 4 mitchell sd.

The Roxy Theatre was loctaed at 209 N. Lawler Street and it seated 500 people.

Here is the updated site:
http://tinyurl.com/5avtzy

The original architect on the Roxy was Floyd Kings of Mitchell, SD. The architect on the Luxury 5 was T-K Architects of Kansas City, MO.
The capacity at opening of the Roxy was 600. In 1959 it was cut to 527 when it was re-seated with American Bodiform seats.
The Luxury 5 now seats 801 in 5 auditoriums.
This theatre has always been owned and operated by the Logan family dba Logan Luxury Theatres Corp. The family did lease it out to a Mr. Nolop from about 1943 to 1948 and again to Hans and Mibs Hanson from 1949 to 1959.

Based on a front-page article in the following day’s Argus-Leader of Sioux Falls SD, the fire that destroyed the Roxy occurred on the morning of Sunday, Jan. 7, 2001.

It started in the concession area. “Most damage was contained to the oldest portion of the theater. A 1989 addition that includes three more movie screens was protected by fire doors”.

According to the article, Nelson Logan moved from Los Angeles to Mitchell and converted a garage to a theater in 1933. His son, Jeff Logan, owned the Roxy at the time of the fire. No one was hurt, but his extensive memorabilia collection was lost.