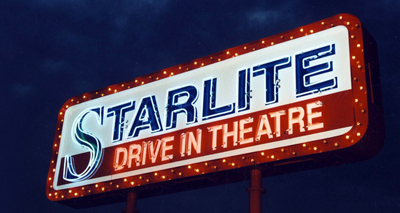 The Starlite Drive-In showed first-run films from May until September, and also featured a playground and miniature golf. It was closed at the end of September 2013 with “Despicable Me 2”. It was reopened by Logan Luxury Theatres in April 2020.

On a recent road trip we stopped by the Starlite and found it fantastically enchantingâ€" the people who worked there were obviously tremendously proud of their theater and played up the nostalgia of the drive-in to great effect. With the logistical difficulties of operating a drive-in these days, I sure hope people stop by Mitchell on their way across the states to see the Corn Palace and take in a film at the Starlite. Mitchell’s a great place to spend the night.

This was listed as the Lakeview in the 1967 IMPA.

It was always spelled Lake Vue.

The LAKEVIEW/STARLITE held 375 cars and was owned by Lakeview Co. in 1956.

Thanks Mike and Chuck.

There is a major problem with the map as it shows the theater as South of Mitchell but it is North of Mitchell past the lake. The last time I went to that drive-in was in 1958.

An article from KDLT News: Mitchell Drive Inn Movie Theater’s Last Summer July 24, 2013 10:54 PM One of the six remaining drive inn movie theaters in South Dakota is closing for good. The Starlite Drive Inn north of Mitchell will shut down at the end of this summer. It’s not because of a lack of business. In fact owner, Jeff Logan says he’s having a great summer. And that makes the decision to close even tougher for Logan who has owned the drive inn since 1976, when he bought it from Rod and Fran Hanson. Back then it was called the Lake Vue Drive Inn. “A lot of the memories are those great nights when you have a beautiful South Dakota evening stars in the sky, cool breeze, and there’s just nothing better than being out here watching a movie,” said Logan. Movies began lighting up the big screen north of Mitchell in 1949. They have always been delivered in the form of 35 millimeter film. The projection booth at the Starlite features a modern automated film system.
“As film its actually fairly sophisticated,” said Logan. Problem is, at the end of the year, the movie companies will stop the expensive process of shipping the heavy reels of film and switch to the more cost effective digital format. Movies will arrive on a small hard drive or simply be downloaded by satellite making the equipment in this room, obsolete. “It’s the march of technology if we could stay with film we could go on forever”, said Logan. A new digital projector would cost upwards of 70-thousand dollars. And try as he might Logan could not justify the cost. And his decision to close was… “Long and painful, and sad, and we tried to put it off for a long time, we kept thinking we will figure a way to do it,” said Logan. He has 3 indoor theaters with a dozen screens, and already knows what it takes to convert to digital. Other theater owners are facing the same decision “Most are able to make it, or have the volume, unfortunately for drive inns especially in the northern part of the country and in rural areas without a big population base, just like us, it a very, very tough decision and tough math to try to make it work out, said Logan. This isn’t the first time the math hasn’t worked out. The drive inn movie business bottomed out in the mid 80’s when HBO and VHS machines exploded onto the market. Logan closed down, but was able to reopen 7 years later when drive inns began showing first run movies and the crowds came back. However, this time Logan doesn’t see any light at the end of the tunnel.
The Starlite’s last night to shine is scheduled for mid-September. “I don’t want to think about that, uh, you know when we closed in 1986, we never really announced it, we just closed up, you know you make that announcement on the last night, thanks for coming, see you next spring, knowing that there probably wouldn’t be another spring. This time we’re just facing it earlier and we’re saying no, there’s not going to be a next spring, and so you say goodnight for the last time”, said Logan. The 10 acres the Starlite sits on north of Mitchell will be put up for sale. Logan says they will winterize and mothball the equipment in the off chance that something might allow him to re-open

The most recent Google Street view is from September of 2013 during the week that it closed. The marquee reads: FINAL NIGHT SATURDAY “Despicable Me 2” Longfellow Carnival Everyone Invited $15 Carload

Can you mark drive-in open. Logan Theatres is reopening it!!