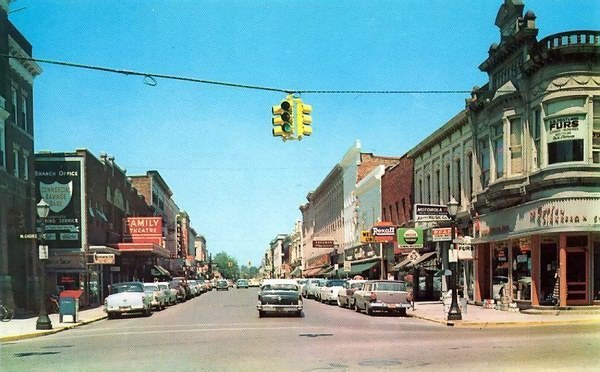 In the mid-1910s, the Family Theatre was operated by Elwyn M. Simon, whose clever promotional techniques were lauded in this article from the December 4, 1915, issue of The Moving Picture World:

“Manager E. M. Simon Shows Imagination in Putting On Special Features — Is Making His Picture Theater a Valuable Asset to His Community.

“ONE of the livest exhibitors in the southern part of Michigan is E. M. Simon, of the New Family theater, Adrian. He is using big-town ideas in a city of about 10,000 and is making a big success of his theater, which only goes to prove that methods employed in the large theaters in the large cities can be carried out just as successfully in the smaller theaters and in the smaller cities.

“For instance, in connection with ‘Madam Butterfly,’ produced by Jesse Lasky and released through the Paramount, Mr. Simon used incense from his stage; distributed chrysanthemums to the ladies, served tea at both the matinees, and gave his house a typical Japanese atmosphere. Movable serving tables were used for serving the tea; girls dressed up as Japanese maidens passed around the tea. The ‘color’ and ‘atmosphere’ given this production was even better and superior than in some of the larger cities. Everybody in Adrian was talking about ‘Madam Butterfly’ and the result was capacity business during the two days it was shown.

“Mr. Simon recently formed the New Family Children’s Drama League. He gave free performances in the morning on Saturdays for children only. The entertainment usually consisting of a travel picture and a comedy. So popular did these free shows prove that he has found it necessary to give two and three performances in the morning. It was operated like this. He picked out one banker, one clothing merchant, one jeweler and one drygoods dealer, who distributed the tickets. There was no charge. The object in distributing the tickets in this way was to get the leading merchants interested. When other merchants saw how popular the Drama League was becoming, they asked Mr. Simon what was necessary to become a member. Mr. Simon then told them the charge was $10 per year and that they could distribute a certain number of tickets each week. Every leading merchant in Adrian is now a member of the league, which is doing a great deal of good for the boys and girls of that city. It costs about a few dollars for lights, film, etc., every Saturday, but the publicity and advertising we derive from the free shows is worth it.‘”

The New Family Theatre is listed at 114 N Main St in the 1921 City Directory.

The New Family Theatre was still operating under that name in 1925, when it was mentioned in several issues of The Moving Picture World in March and April. One item said that the new owners, Fitzpatrick and McElroy, were planning to remodel the house. As the name of the house was New Family in the December 4, 1915 item I noted in my previous comment any move from 31 N. Main to 114 N. Main probably took place before then.

The 1914-1915 American Motion Picture Directory lists only the New Family Theatre (with no adress) and the Maple City Theatre as 31 S. Main Street.

The management of the New Family Theatre advertised in the “Help Wanted” section of Moving Picture World of July 26, 1913, seeking a piano player.