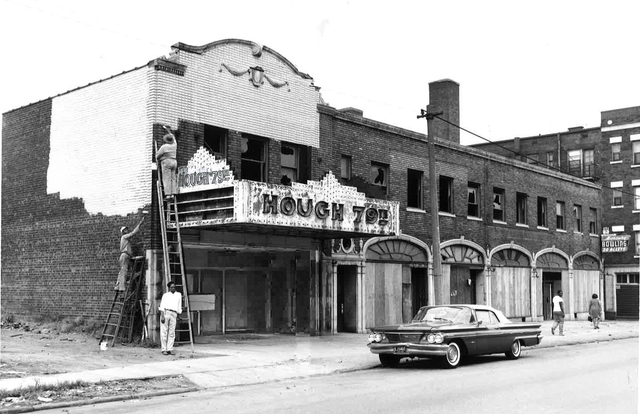 The Hough-79th Theatre opened at the corner of Hough Avenue and E. 79th Street in 1924 with the inaugural film and “Husbands and Lovers”. Cleveland’s Hough neighborhood was named for settlers Oliver and Eliza Hough who moved there in 1799. M.B. Horowitz opened the Hough-79th Theatre as part of the Washington Circuit. Historic population shifts moved the neighborhood from upper middle class and upper class mainly Caucasian to immigrants to 90% African American Seat. Seat count varied between 750 and 917 but likely ended at the 750 count when CinemaScope screen technology was added in 1955. The theatre also hosted a weekly jamboree, grand ole spry-styled show simulcast on radio hosted by air personalties Tex and Glen Clark

The theatre likely closed as a sub-run double-feature discount house for African American audiences in 1964. The former theatre was next to the epicenter of the famous Hough race riots in 1966 that saw a neighboring business, Seventy Niners' Café, spark a race riot that led to arson, injuries and death. Following the 1966 riots, the Negro Business and Industrial Association took on the Hough-79th Theatre venue planning to transform it into a roller skating rink and community center. The theatre appears to have been demolished in 1984 and the Lexington Village residential units have since been built where the business district once stood.