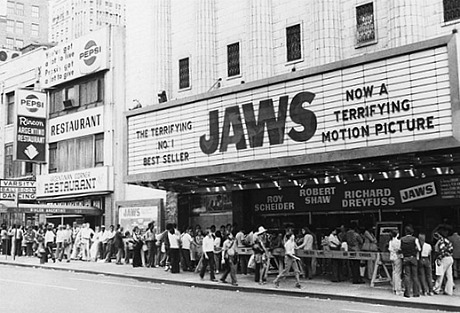 A “sister” to the nearby Rialto Theatre, this lost theatre was a palatial early delight and once one of the grandest theatres on the east coast. The 2,092-seat Rivoli Theatre opened December 28, 1917 with Douglas Fairbanks in “A Modern Musketeer”.

The 1950’s deeply curved screen was enormous and generated the illusion of peripheral vision. The Rivoli Theatre, along with the nearby Capitol Theatre, showed event films and both movie houses showed “2001” on their giant screens. Patrons also recall that the sound quality of the six track stereo was as impressive as it’s visuals.

Where urban blight had at once shuttered, but saved the Rivoli Theatre from development, a turn around in the city’s fortune made the site too tempting for developers. The Rivoli Theatre, one of the greatest of all New York City theatres, was demolished after closing in June 1987. It has been replaced by a black glass skyscraper.

Ed S - I have no idea but I suppose that was possible - I saw 2 films in one evening at the Golden Gate in SF in the early 70’s - one on a flat wide screen (the musical western Zachariah), the other on their Cinerama screen (a sneak preview of The Andromeda Strain). One of the recent commenters above posted that he was the manager of the Rivoli in the 70’s. Maybe he could chime in on that.

Oh yeah! Wally where are you??

I know the acrimonious discussion of what constitutes a “roadshow” has been mercifully deleted, but in looking at the show-biz bible Variety’s review of the original West Side Story (dated 9/27/61) please note the following quoted passage:

“The Robert Wise production, said to cost $6,000,000, should pile up handsome returns, first on a roadshow basis and later in general runs.”

I wonder if that settles anything…

to Mike (saps)- the discussion of roadshow engagements was as you say a tad acrimonious but I believe the quote from Variety’s 9/27/61 review of West Side Story settles the argument.

if I remember the person complaining about our use of the term “roadshow engagement” said it was technically only correct during the silent era when films frequently traveled from town to town and were hence always on the road.

In addition to Mike (saps) find in Variety, on page 4 of the photos for the Rivoli, I noticed a newspaper ad grindhouse uploaded in Aug 2020 during the run of West Side Story that exclaims about ¾ of the way down “EXCLUSIVE ROADSHOW ENGAGEMENTS For Your Convenience in the New York and New Jersey Areas”.

Here’s a new 4-page 50th anniversary FIDDLER ON THE ROOF retrospective featuring a roadshow playdate chronology and historian Q&A. The Rivoli’s 58-week run is mentioned in the piece.

Passing along the link to my 3-page 60th anniversary retrospective on WEST SIDE STORY, which includes a historian interview and reference listing of its roadshow engagements. The Rivoli, of course, gets a mention.

South Pacific’s roadshow run which started at the Criterion moved here at some point. it would be interesting for a 1st person account of seeing it here on the curved screen installed specifically for films shot in Todd-AO as opposed to what I assume was a flat screen at the Criterion.

If you look up Bosley Crowther’s NYT’s review of South Pacific at the Criterion he says the screen is curved. Was it installed for this one film and then taken down when Old Man and the Sea moved in? I assume anybody who could explain this has gone to their reward.