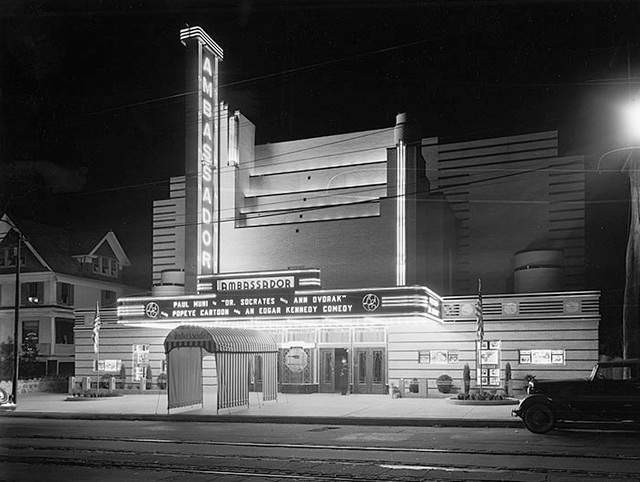 Northwest Baltimore has several of the more interesting movie houses, but it’s the Ambassador Theatre which is perhaps the most interesting to see. The Art Deco style theatre commands the block, and while it hasn’t been a movie theatre since 1968, it still shines in the grace it once had.

The Ambassador Theatre has in recent years, been used as a church, a beauty school and a church again. The theatre was opened on September 18, 1935 with Marion Davies in “Page Miss Glory”, and it’s opening helped shut down the Gwynn Theatre across the street. The Ambassador Theatre is a real gem of a building, and its exterior has survived the years quite well.

One of the outstanding features about the Ambassador Theatre is its vertical sign, which dominates Liberty Heights Avenue.

Linkrot repair: The December 14, 1935, Boxoffice article about the Ambassador Theatre can now be found at this link.

Art deco beauty in this theatre.

The September 15th, 1935 grand opening ad can be found in the photo section for this cinema.

My and I spend many hours watching films at this theater in the 60’s . From West side Story to The Nutty Professor to to the Wild Angels and John Wayne in The Sons of Katie Elder and so many more . I can still remember the concession counter and as you walked to your seats the “ Restroom ” sign was lit in neon purple and the door leading to the balcony. Unlike the photograph they show here , they have those purple lights on the walls next to the screen and made a bit spooky for a kid under 10 .And on rainy days they still used the same long tent , so you be dropped off at the curb and not get wet to the ticket booth and it was the same one from the 30’s . I passed by there during the 80’s and saw it was a beauty shop . I never known till I saw a picture years ago with a theater across the street was called in the 60’s Penn Fruit grocery store. The hangout for teens was Reads down at the end of the block Since I spent my childhood going to the Ambassador and Crest with my family and friends . Even as a kid , the outside of the Theater always seemed special and am glad its a Landmark , since I had never seen another Theater in Baltimore built like that ever .

jammer, where did you live back then? I was on Forest Park Avenue, a few blocks below the golf course.

The Google street view has not been updated since 2012, so it still shows the boarded up Ambassador Theatre.

David, what would a current view look like? What’s happening?

Apparently still standing and for sale. This realtor’s listing was updated in July. Photo I believe is from 2017.

The Baltimore Business Journal has an article only avail to subscribers dated Jan 19 of this year, with headline “City pumps $550k into dilapidated Ambassador Theater to save it”

Wow. That’s only $19,900 less than the asking price. So perhaps they just want to break even, in the hopes a developer will bring it back.