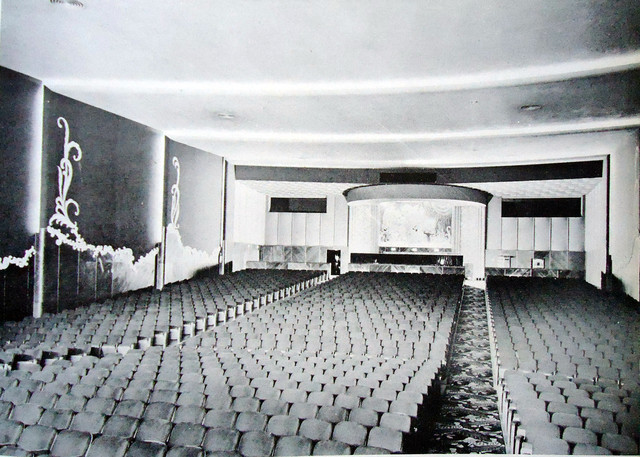 The Crest Theatre which opened in 1949, was located in a shopping strip located at Reisterstown Road and Northern Parkway in northwest Baltimore. All seating was located on a single floor. Its wide screen was the hugest one of all the northwest neighborhoods including the Uptown Theatre. It was the theatre where the roadshow movies were shown during their neighborhood runs. These, of course, were the 35mm versions without intermission, etc. However, the large screen more than compensated.

I remember as a kid seeing “West Side Story” there. Later, “El Cid” was also presented there. I also remember seeing “A Shot In The Dark” there.

This theatre doesn’t get much a mention when theatres in northwest Baltimore are discussed. There is no mention of it in a site dedicated to local Baltimore theatres. Nor does anyone remember it here.

The theatre was part of the quartet of theatres along the Reisterstown Rd. - Park Heights corridor. These included the smaller Avalon Theatre, the Uptown Theatre and - although located in suburban Pikesville - the Pikes Theatre.

As a teenager, I remember a couple friends of mine who boasted they saw two great movies - one they saw at the Uptown Theatre, then took the bus up to see the movie at the Crest Theatre. This was during the James Bond craze where every movie studio was producing their own versions. The one at the Crest Theatre was called “Our Man Flint” starring James Coburn. I believe back then there was greater diversity in films than there are now at the multiplexes but that’s another story.

After JF closed the Crest Theatre it was reopened by an independent entrepeneur as a dollar house. It did not remain open very long. Additionally, during the years I lived in the neighborhood, local chain JF owned the Crest Theatre, the Uptown Theatre and the Pikes Theatre. JF and another local chain, Durkee, owned the majority of the major neighborhood houses. Although Trans-Lux owned a portion of the downtown houses for a while (the Little, Town and Hippodrome) JF retained complete ownership of all the downtown theatres.

An interesting aside is that the Trans-Lux theatres in spite of their sizes had an intimate feel to them while the JF theatres had the feel of a big house.

Again, if anyone with more accurate and more reliable information about the Crest Theatre is welcome to comment.

The property the Crest Theater was built on I believe was previously part of a farm owned by the Bell family. Two of their daughters, Miriam Bell and Elizabeth McDaniels lived in the big white house adjacent to the strip mall for many years. I was born in 1950 and lived on Lewiston Avenue, one block up from the Crest. Our backyard opened onto the parking lot for the Crest. My grandfather often made “side money” by directing traffic or parking cars on their lot. He would have a barrel with a fire going in it on cold nights. My aunt worked behind the candy counter while she was in school. Another of my aunts worked at the Hilltop Diner as a waitress for awhile. My grandmother would send Sunday dinner to the man that took the tickets at the Crest, we just called him “Pappy”. When he would see me walking by he would motion for me to come in and ask if I would like to see the show. I spent many happy days in the cool comfort (we had no air conditioning but the Crest was always a haven in the summer) of the Crest watching Doris Day, John Wayne, Natalie Wood, etc. Great memories. There was a little jewelry store next to it on the right side. On the left side was the dairy store, the Jewish butchershop, Eddie’s Supermarket, Mandell & Ballow (I do remember Dave, I was always very shy and he would give me bubble gum-he had a very shiny bald head and for some reason, it scared me, even though he was an extremely nice man). At one time there was a toy store but it disappeared after the fire, I think that is when Mandell’s left, also. There was Barcelona-a candy and nut store, the bakery-best chocolate donuts ever, a bank and a bowling alley around the corner downstairs. I believe there were other office buildings upstairs. Just across Rogers Avenue was Weiner’s Drug Store where you could buy coddies, fountain cokes of all flavors, and snoballs with marshmallow topping or ice cream. The Crest used to have premieres, complete with flood lights (reminded me of Gotham City calling Batman!). On those nights, the parking lot would be overflowing as well as most of the side streets around the theater. The lounges upstairs were very lush. The stairs were covered with plush carpeting. It was very nice.

Construction in progress at the Crest: about a month ago I rode by there, and there was a huge hole in the southeast wall (to the right of where the screen was). Obviously the tabernacle is closed; the pawn shop and carry-out in the former lobby are still open.

Update: The auditorium has been completely gutted. Iron beamwork has been built inside the auditorium, extending to the land outside of it.
The businesses in the former lobby are still open.

Much of the auditorium area is now occupied by offices of the Maryland Motor Vehicles Administration (MVA). Small shops have been added to the area outside the southeast wall.

I grew up on Tippett Ave. one block away from the theater. I spent many a Saturday mourning mowing lawns or shoveling snow to spend the afternoon at the Crest watching a Cowboy or Horror movie. One of my fondness memories is seeing the Wizard of Oz three times in a row and not being able to sleep that night because I knew a Witch was lurking in every dark shadow. We moved away from there in 1963 but I will always remember the 25 cent admission ticket and the 10 cent popcorn that consumed a lot of my Saturday afternoons.The Crest may be gone but it will remain a part of my child hood memories.

The Crest wasn’t the best in the area but I liked it . One thing no one commented on was that Muriel on the back wall where the projector window was . It had Disney characters painted on it with Mickey , Goofy and others . At this theater I saw my first …. James Bond Film Thunderball at 8 years old , the Crest was the only theater in the area that shown 007 films . strange huh ?

Jammer, in Philadelphia United Artists releases, including the Bond films, always seemed to show up at the Sameric theaters. Perhaps the chain that owned this theater had a similarly tight relationship with UA.

RickB, when I lived in Philly in the 1950’s, the Benner on Castor Avenue was my local theater.