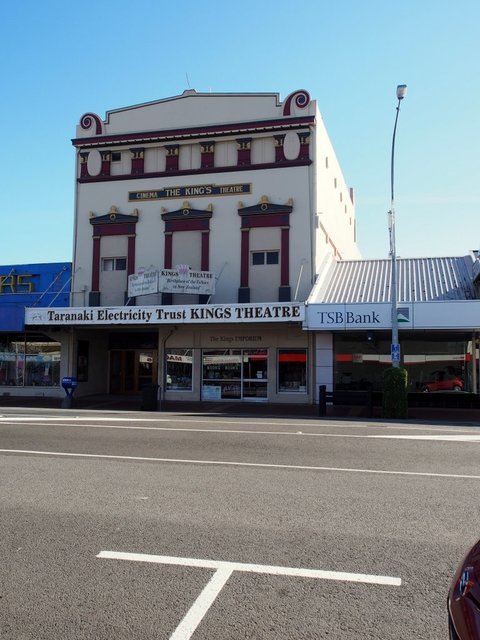 Located in Stratford, near New Plymouth on the North Island. The Kings Cinema Theatre was built on the site of His Majesty’s Theatre which was demolished in late-1916. The new Kings Cinema Theatre was built for and operated by Stratford Pictures and Amusement. Plans were drawn by architectural firm Grierson & Aimer, but due to both men being on active service during World War I, the supervising architect was G.S. Golsboro. It opened on 31st December 1917 with Olive Thomas in “Madcap Madge”. Seating was provided for 720, with 100 in the pit, 270 in the stalls and 350 in the circle. It boasts that it was the first theatre in the Southern Hemisphere to demonstrate ‘talkies when on 1st April 1927 De Forest Phonofilm had its first public screening. On 9th November 1929 it was equipped with a Western Electric(WE) sound system and Bessie Love in “Broadway Melody” was screened.

A Shakespeare Festival was staged in May 1990 and the theatre was taken over by the Stratford District Theatre Trust who reopened the Kings Theatre in November 1990 with a production of “Wuzel Gummage”. Restoration followed and was completed for a gala reopening on 31st January 1992 with Kevin Costner in “Robin Hood, Prince of Theives”. The Kings Theatre continues today presenting first run films and live theatre productions.