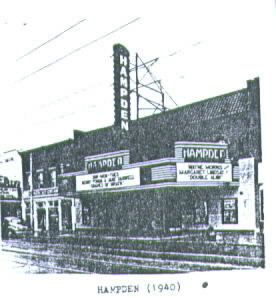 The original building was constructed in 1911, but the current building was built in 1938. The Hampden Theatre seated 800 and closed in 1976.

The Hampden was an ersatz twin to the Ideal theatre which was exactly next door I know the Ideal because I remember as a kid taking the No. 10 bus with my father to see “One Hundred and One Dalmations”(the original animated version). The movie trailers showed previews for John Ford’s classic"The Searchers" and a forgotten black & white B movie called “The Pusher”. That’s what made moviegoing fun and interesting in those days – the amazing diversity. One day the theatre’s showing a quality western film, the next a trashy lurid black & white low-budget B. The Ideal was a neighborhood theatre in the true sense as it changed shows 2 or three times a week.

Anyway the Hampden and Ideal were twin theatres before there really were twinned theatres. However, the Ideal closed some time before the Hampden.

I do not think the Hampden and Ideal were adjacent to each other, I think something was between them, perhaps the Arundel Ice Cream Store.

I spent many a Saturday at one of those two theaters. They had a feature film, serials (on Saturdays) and the newsreels.

If you were under a certain age (12 I think) it only cost twelve cents to see the movie. So for about thirty cents you could see the movie, get a soda and perhaps popcorn or candy.

Also, this was long before the time when movie theaters decided the best way to make a lot more money was to throw you out after one viewing, so many of us watched the movie over and over, we could blow in a whole Saturday at the movies.

There was a balcony and it was generally thought that those who wanted to “neck” would sit there. Also, way back then smoking was actually allowed in the theater. For a while you could just smoke in your seat. Then I think it was that you could only smoke in the balcony, then later at the back of the theater.

Sometimes, if you had a lot of nerve, you could sneak into the movie through the back door, when some patron would go out if you were waiting you could just come in that door. I never had the nerve for that.

There were actually ushers and they would show you to a seat using a flashlight so you would not trip and fall going down the aisle.

I remember one saturday (must have been in the winter) I went for the matinee. I left my brand new jacket on the seat when I went to the concession stand for a soda. When I came back someone had stolen my jacket. I can tell you, I got into a lot of trouble for that!

In those days I was vey much i
“in love” with the Durango Kid!! I also loved those Tarzan serials, and was sure that there really were buildings with walls that would close up and squeeze you to death, or huge plants that if a man stepped into them, would snap shut like a Venus Fly Trap and kill him!

Here is a March 2007 news article about the restaurant currently occupying the theater space:
http://tinyurl.com/3x84m6