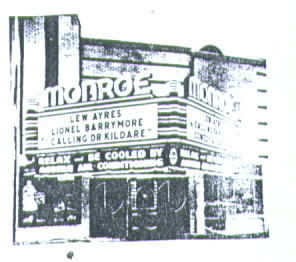 The Monore Theatre was built in a Moderne style with yellow brick construction and black enamel detailing. It was located in the 1900 block of West Pratt Street. There were three movie theatres within a three block radius of this area, the Monroe, the Royal and the Horn. The second run house for the “Pigtown” neighborhood, the Monroe could seat 500 and ran second run fare to the Horne Theatre.

All three theatres are still standing and have been used for other purposes. The Monroe has been used as a Volunteers of America thrift store, but lately it seems to be closed. The building isn’t hard to spot, and appears to be in good condition. The Monroe Theatre showed movies from its opening on around July 6, 1939 through to its closing in August 1953.

The Monroe was Pratt Furniture a few years ago.

The map view shows it as a church, but that was a few years ago.