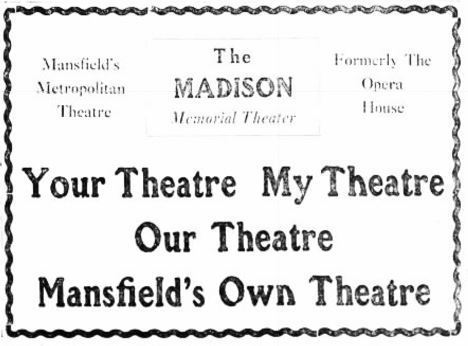 The Opera House was opened in 1889. In 1924 it was taken over by W.A. Partello. On August 28, 1927 it was renamed Madison Memorial Theater and was operated by the Skirball Brothers. In early-1928 a Wurlitzer Style B X Special theatre pipe organ Opus 1822 was installed. It had 2 manuals and 5 ranks in two chambers. The Madison Memorial Theater was destroyed in an overnight fire on February 10, 1929. Two men lost their lives fighting the blaze.

A new Madison Theatre was built on the site to the designs of architect John Eberson and it opened September 15, 1931 and has its own page on Cinema Treasures.

Mansfield’s Romanesque Revival style Opera House was opened in 1889 and was designed by Chicago theater architect Oscar Cobb, as was the adjoining Soldiers and Sailors Memorial Building, still standing and now housing the Mansfield Memorial Museum.