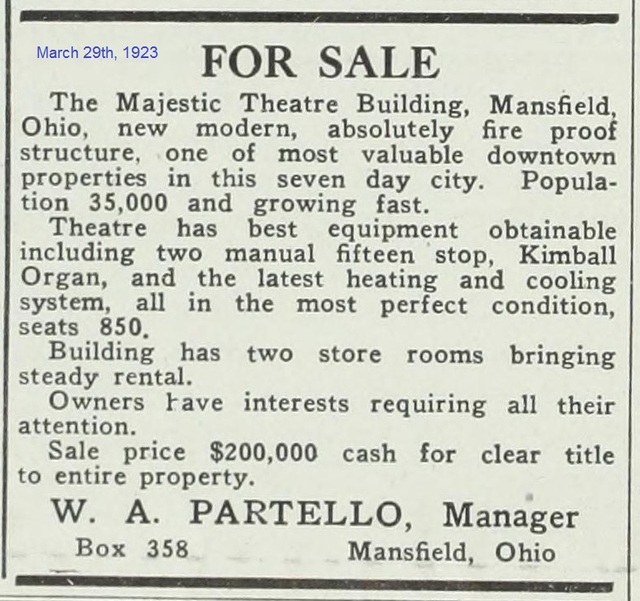 The Majestic Theater was opened January 1, 1917. Designed by Mansfield architects Hazeltine & Hush, the interior decorations were by Cleveland based designer William Strelpenger. It was equipped with a Kimball organ which was opened by organist K.C. Parker. It was taken over by Warner Bros. Circuit Management Corp. from 1935. They closed the theater on June 4, 1943, and on December 26, 1944, a heavy snowfall collapsed the roof.

The Majestic Theatre operated from January 1, 1917 to June 4, 1943, with at least one lengthy interregnum during the depression.

The December 24, 1935, edition of The Mansfield News-Journal said that Warner Bros. would reopen the newly redecorated Majestic Theatre on Christmas Day. The house had been closed for more than a year. Warner planned to have daily shows at the Majestic until January 5, after which it would return to a policy of operating on Saturday and Sunday only.

A readers' question-and-answer column in the December 23,, 1966, issue of the News Journal told of the end of the Majestic Theatre:

This web page reproduces a list of the events of 1917 as published in the December 31 issue of The Mansfield News, and it says that the Majestic Theatre opened on January 1, 1917.