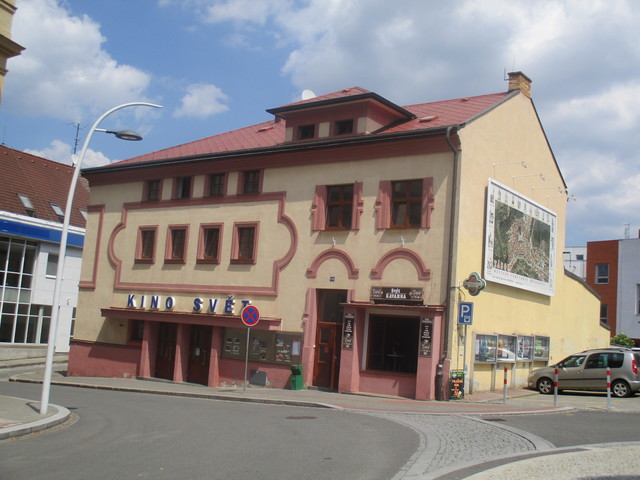 Tabor is a city in the South Bohemia Region of the Czech Republic.

The foundation stone of the cinema was laid in August 1924. The building was designed to be multi-functional, with a stage and orchestra pit. There were 700 seats. The main investor and operator was the Biographical Co-Operative of War Invalids. The cinema was called Bio Invalids, and it opened on 25th December 1924 with “Quo Vadis”.

In 1933, the Co-Operative was in financial trouble. The cinema changed hands, with the new owners renaming it the Bio Lucerna. During the German occupation, the cinema was renamed Viktoria. After the war, until 1948, the name of Bio Lucerna was used again, then it acquired its current name, Kino Svet [“Cinema World”].

In 1958 a wide-screen was installed, the first screening in that format being “The Last Paradise”, an Italian film starring Vairia Hatamou and Terei Autoroia, on 29th March that year.

After 1990, the building was returned in restitution to the original owners, who leased it to private operators. When the owners decided to sell the cinema in 2000, the town of Tabor bought it in order to safeguard it. It remains in civic ownership.

In 2000, the heating system was updated, the seating capacity was reduced and the screen size was altered to 10.6m x 4.5m. At the same time, the sound was significantly upgraded, initially to Dolby Surround SR, followed in 2004 by DTS, DTS ES and DOLBY DIGITAL.

At the beginning of 2012, financial support was received from the Czech State Fund for Support and Development of Czech Cinematography for the installation of digital projection equipment.

During this installation, a HARKNESS SPECTRAL 240 3D screen was installed, lighting was upgraded and the seats were replaced.