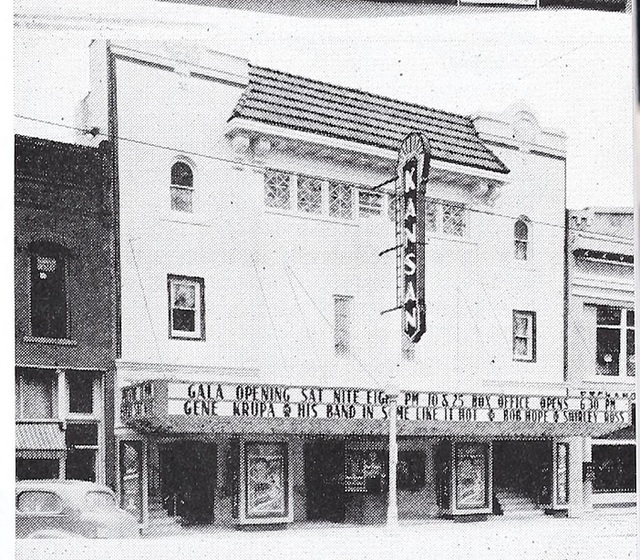 The 1,000-seat Best Theatre was opened on July 19, 1911. It was remodeled in 1914. It was equipped with a Kimball theatre organ. On May 27, 1939 following another remodel it reopened as the Kansan Theatre with Bob Hope in “Some Like It Hot”. It was part of the H.J. Griffith Theaters INC. chain. It closed in 1960 and was converted into a dry cleaners and has since been demolished.

This theater was originally named the Best Theater. It was remodeled in 1914 and could hold 1,000 movie goers. In the 1940’s it was remodeled once again and renamed “The Kansan”.

The Best Theatre launched on July 19, 1911 with “Is Time for Press,” “The Baseball Star from Bingville,” “Fighting Blood” and a “Spot Song.” The Best closed as a silent theater venue in June of 1928 for a major, three-week, $30,000 refresh under a new name. The Kimball organ was excised as Dickinson Theatres Circuit decided to equip the theatre with a “super organ.” The operator stated that silent dramas would best be presented with a “super organ.” A $20,000 Wick three-manual direct actuation electric model was selected as that super model. New Motiograph projectors and all new seating were also part of the update. The booth was expanded in the event that the theatre might adopt sound equipment in the future.

The Best closed with the film, “Ladies' Night in a Turkish Bath” on June 16, 1928. While the theatre was closed for the refresh, Dickinson reopened the moribund Liberty Theatre on June 18, 1928 to carry the Best/Uptown bookings. The New Uptown Theatre launched with silent films on July 2, 1928 with Colleen Moore in “Happiness Ahead,” live music with Don Reynaldo Torres and Troubadours Orchestra and Jimmie Durkin at the Wick organ.

The theatre was equipped for sound in March of 1929. During the Depression, sponsored a popular Bank Night. That, however, was ruled as an illegal lottery in 1935 and discontinued. On November 24, 1935, Dickinson Circuit then renamed this venue as the Dickinson Theatre relaunching with Gary Cooper in “Peter Ibbetson.” The displaced Uptown was getting a new location just two doors Eastward to its new home at 1815 Main Street retrofitting an existing retail spot - Smith Clothing Company - for a streamlined theater. (The New Uptown opened on a 15-year lease on December 8, 1935 and has its own CinemaTreasure page.)

When H.J. Griffith Amusements merged with Dickinson in 1939 creating the Griffith-Dickinson Circuit, Griffith decided to refresh both the (New) Uptown and the Dickinson. The Dickinson sign was removed with a naming contest for the new location. After its refresh the contest winner was announced with the venue renamed the Kansan Theatre. The new Kansan opened May 27, 1939. It launched with Bob Hope in “Some Like It Hot”.

The Kansan re-upped with a ten-year lease in 1950. It closed in 1960 and was converted into a dry cleaners and has since been demolished.

Advertisements that appeared in various issues of The Reel Journal in 1924 feature the letterhead of the Best Theatre, which gives its address as 1819-1821 Main Street. The house was operated by brothers Otto and Fred Feess, who billed it as “The Theatre for the Whole Family.”