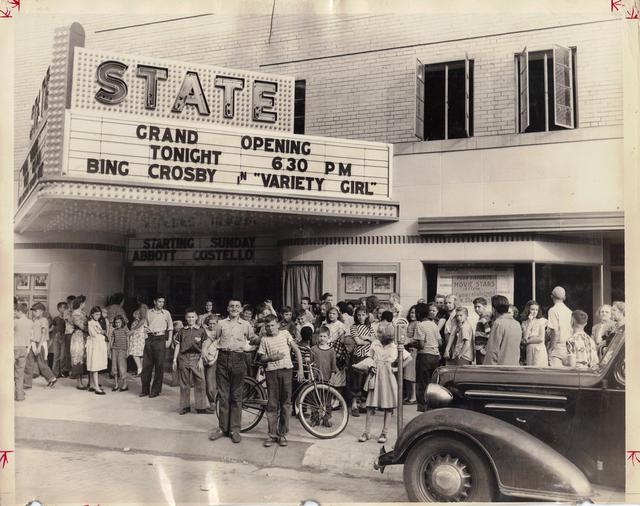 The New State Theatre opened on July 15, 1948 with Bing Crosby in “Variety Girl”. It was operated by the Marchesi Brothers, who had operated the original State Theatre from 1935 until 1948 at another address on Stephenson Street in a converted store.

The New State Theatre could seat almost twice the amount of the original’s 350. In the mid-1950’s the State Theatre (it had dropped the “New” by then) was taken over by the owner of the Lindo Theatre (then still known as the Freeport Theatre), who ran the State Theatre until it closed in 1964. The theatre was reopened five years later by the Chicago-based Great States circuit, which continued to operate it for many years.

I recall this theater closing sometime in the Spring of 1986, with “To Live And Die In L.A.” being the last feature shown there. I’d seen “Jagged Edge” at this theater just a couple of months before that, for an admission price of $1.50. There may have been a half dozen other patrons in the theater for this showing, which made the interior of the theater appear positively cavernous. I’d seen “Day Of The Dead” at this theater in the late Summer of ‘85 and that feature played to a nearly empty house, as well, so it didn’t surprise me much when I found out the theater had shut down less than a year later.

I forgot to add the name of the person who posted the 3 B&W 1948 photos, that I re-posted in the Photos Section above. They were originally posted by Crystal Cheeseman Roling Porter to the “You know you’re from Freeport if…” Facebook page.

An advertisement in the January 14, 1948, issue of the Freeport Journal-Standard said that the New State Theatre would open the following day.

It Actually Opened On July 15, 1948 With Bing Crosby, Gary Cooper And Bob Hope In “Variety Girl”.