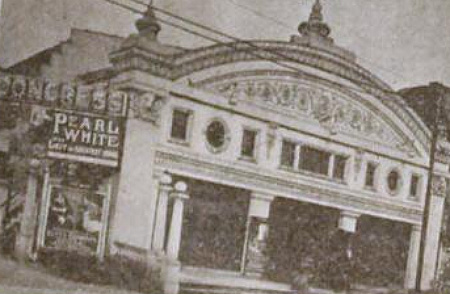 Opened as the Olive Theatre in 1911 with 1,096 seats. It 1913 it went over to legitimate theatre use and was renamed Marguerite Clark Theatre. In 1915 it became a full-time movie theatre, one of the larger neighborhood theatres operated by Franchon & Marco and was renamed Congress Theatre. It was just west of the Grand White Way where all the big movie palaces were. This was a beautiful theatre with a very impressive front and very large marquee. The inside was very ornate and had a fairly large balcony.

The thing that made its interior so different from the other ornate theatre is that everything was done in green. The curtains, the seating, the carpet and all the wall decorations. The theatre walls were lined with ornate wall sconces that dimmed at the start of the feature. A large chandelier in the main auditorium really lit the theatre up before and after the movie. One of the largest concession stands of any of the neighborhood theatres.

The Congress Theatre was closed in July 1954, and was used by a church for a while until it was demolished.

Located at the intersection of Olive & Sarah, the Congress was built in 1911 and opened as the OLIVE Theatre.

In 1913 theatre presented legitimate drama, was renamed the MARGUERITE CLARK.

In 1915 theatre became the CONGRESS.

There was a Msasonic type organization occupying the buiolding a few years ago. I was able to go in to see . Just a big hall now.
JamesGrebe

As noted once before, the theatre was built in 1911 as the Olive and operated under the same management as the Delmar Theatre. In 1913 it was renamed the Marguerite Clark (the stage & screen actress who lived from 1883 to 1940). In 1915 the theatre became a full-time film house, owned by the Greek Consul in St. Louis A. M. E. Pasmezoglu who operated a number of film theatres in the community.
In 1925, theatre was leased to St. Louis Amusement who operated the theatre until 1945. In that year, theatre came under the wing of Joe Litvag, who operated until closure in July 1954.

Capacity of the house originally was 1096, later reduced to 898.

After closure as a theatre, the structure was used as a church and was eventually demolished.

Do you know where I can find more info re the early greek movie/theatre owners in St Louis (like Pasmezoglou)?

Elsewhere Greeks operated the United Amusements theatres in Montreal and Sankitos theatre in San Antonio. Kerasotes Theatres was Greek owned, had theatres in the Illinois suburbs of St. Louis.

The August, 1911, issue of Motography had this item:

“The E. H. Pipe Realty Company, which is erecting a moving picture theater on Olive street, between Vandeventer avenue and Sarah street, has leased the same to the Olive Theater Company for twenty-five years at $2,000 a year.”

The September 3, 1910, issue of The American Contractor said that the theater to be built at Olive and Sarah Streets in St. Louis was being designed by architects Clymer & Drischler.