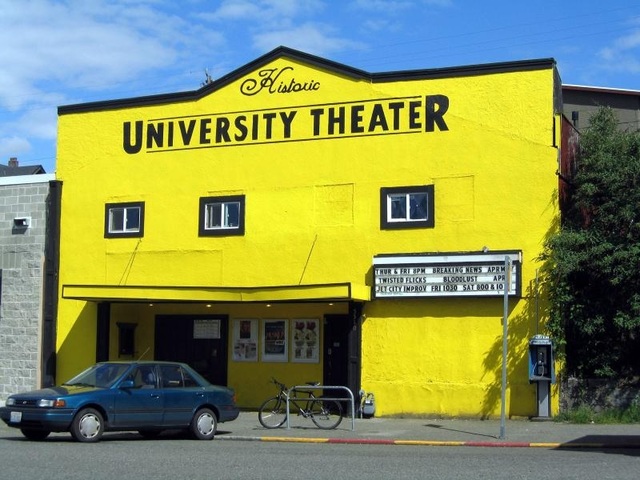 According to a person posting as “Good_Citizen” in the comments section of the Seattle Times article “Explore Seattle’s Romantic - and Vanishing - Historic Moviehouses”, the University Theater was an art cinema that opened in April of 1971. During renovation it was discovered the location had been the New Home Theatre showing silent movies from 1914-1924. The University Theater added a second screen some years into its operation on the second floor behind the projection booth. The University Theater closed in 1986 after declining attendance due to the advent of VHS cassettes.

The building still exists and has been the home of the Jet City Improv troupe since 2003.

“Good_Citizen” posted the following in the comments section of the Seattle Times article “Explore Seattle’s Romantic – and Vanishing – Historic Moviehouses”:

I appreciate that at least a few people have remembered the University Theater, because I grew up in and loved the movie business. My father ran a successful a twin art theater near the University of CA, Berkeley in the 1950’s and 60’s.He sold and we moved to Seattle in 1968 and I was a teenager in the family that started the University Theater, so let me add a bit of history for the theater buffs that still remember those good old days. The University Theater opened in April of 1971, which was the time of a very bad recession in Seattle. Who remembers the billboard; “Will the last one out of Seattle please turn out the lights?” During the renovation of the building, it was discovered that there was a sloped concrete floor under the flat floor, so we knew it was originally built as a theater. A bit of research revealed that it was originally built in 1914 and operated until 1924 as the New Home Theatre which showed silent movies. I was told that the New Home Theater was the first theater built north of the ship canal.

The University Theater always struggled financially and so the themes were shifted from art films to Hollywood heyday movies to sub-run of recent releases or cult films and off beat movies. The University Theater was finally closed in 1986 because there was simply an insufficient audience to keep the doors open. The issue of a diminishing audience started and became increasingly apparent as movies became available on VHS tapes in the 2nd half of the 1970’s, which mostly limited customers to those without children. Parents were more likely to rent the VHS video and watch it at home to save the cost of hiring a babysitter.

I have many fond memories of walking from Roosevelt High school to the University Theater to prep things for the evening, then run the projectors while trying to keep old beat up celluloid movies running without interruption. I have even better memories of an enthusiastic movie audience that shared a wonderful collective experience. For the younger readers of this article, you need to understand that movies and theaters were more unique and personal back in the old days, not like the more sterile boxy impersonal experiences offered today.

When I could get a break from a job that required two working shifts a day, seven days a week, I was thrilled to use my courtesy pass to see movies at the many of the other great old theaters mentioned in this article, most of which do not exist today. A lot has changed from those good old days, but I am proud to say that I was part of the grand days of Cinema Paradiso.

Yes, a number or years after opening University Theater, a not so tiny 2nd theater was constructed behind the projection booth upstairs. Ironically it was not so tiny as it had nearly 100 seats, so it was about the same size as the Grand Illusion / Movie house, but it had a much higher ceiling, so the screen was not so easily blocked by late arrivals finding their seats. As the projectionist, my life became more challenging because I now had to run the projectors for two theaters. To make this possible, a platter system was added to the projection booth for the main theater and the old carbon arc lamps were changed to xenon lamps. That old building had beautiful barn truss solid wood beams, so the 2nd theater had high ceilings with pretty wood beams , which created a very nice space. Also, you might be interested to hear that the seats for the main theater were salvaged in 1970 from a failed theater in White Rock, BC. I was only 15 when that removal work was done, but I remember the hard work to remove and haul them to Seattle. There are a lot of good stories from those old days, so long ago.

This theatre also shows an occasional film under a program called “Twisted Flicks.” The sound is muted and the audience improvises dialogue. Website: http://www.jetcityimprov.org/

There is a Cinema Treasures page for the Home Theatre which existed in the Central District neighborhood before and during the time this location was the New Home Theatre. Perhaps the two were related?