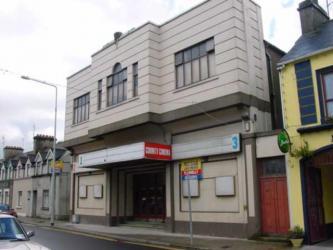 The County Cinema opened at the end of March 1939, presumably a replacement for the Ellison Cinema owned by the same Bourke family. It had a Philips sound system installed and had 680 seats. A fire occurred in the early-1950’s and much of it had to be rebuilt. It closed as a 3-screen cinema on 14th January 1999.

The building suffered an arson attack on 12th June 2001 although the fire was brought under control. It was later demolished and replaced with Stephen’s Place flats along with retail including Domino’s Pizza. One of the notable managers at the County Cinema was Willie Ainsworth.

The County actually closed on 14 January 1999 shortly after the opening of Mayo Movie World.