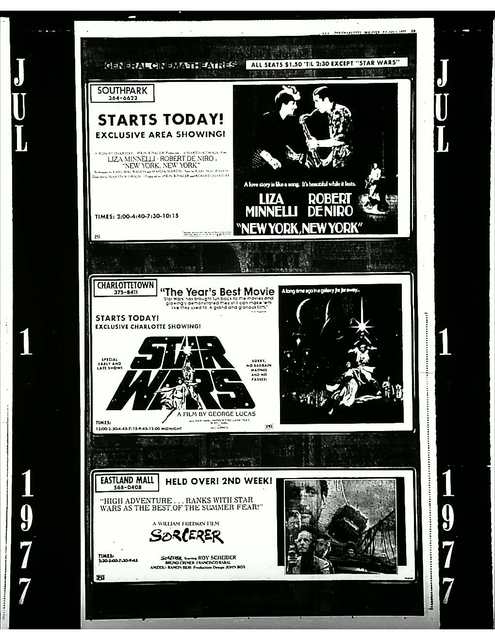 Opened on November 6, 1963 as Cinema I & II. The Charlottetown Mall Cinemas was located off of Queens Road near the main older CPCC campus and across the Midtown Square Mall. A hospital had sectioned off a good bit of her parking to accomodate for the overflow. On May 14, 1976 it became a triple screen theatre when one of the screens was split in two. It was closed in 1994.

The marquee stood as a shell of a sign yet still retains the word “CINEMAS”. The box office and the front doors were covered over with wooden planks and then the whole front area was fenced off.

Demolished in November 2005, the last time I personally knew of someone going to inspect her the roof in the lobby had severe water damage from the air condition being left on. There was also signs that her bathrooms and lobby had been pillaged and there were several homeless residents living in her hallways. Raccoons and rats have made Charlottetown their home as well.

Rumor has it that she and the former Shoney’s building in front of her will make way for a Home Depot.

FYI: This movie theatre was NEVER under Carmike Cinemas in the 1990’s…..this needs to be revised!!!!

THE BIG CHRISTMAS ATTRACTION FOR THE CINEMA I & II It’s James Bond 007!!! More Action and Excitement! More Girls! More Gadgets! More Spectacular Entertainment! It’s the BIG Bond Show for 1965 with Sean Connery-007!! “THUNDERBALL”-See In On The Giant Widescreen In Color!!! For December 17,1965….Ad from the Charlotte Observer!!!

I was one of the many who saw Star Wars here during its original engagement. I was six at the time; my father and older brother went without me – I didn’t want to go (they watched Star Trek reruns all the time and I thought it was the same thing). They came home within an hour because it was sold out. When they tried again, I tagged along and from the opening crawl on, I was hooked – still have my first two action figures from back then – C3P0 and R2D2.

I saw many movies at Charlottetown over the years. It was THE place for midnight movies in Charlotte. They had lenghty engagement of Rocky Horror Picture Show, complete with live floor show that I had the opportunity to see. Also went with friends to a showing of Pink Floyd The Wall, in which I fell asleep halfway through (I’d seen it on video before, though). Saw some great movies there over the years (the aforementioned Star Wars, pre-New Hope title) and some really bad ones (anyone else remember Disorderlies starring The Fat Boys?). It was a great old place, but it was wearing down back in the 80s. Still sad to see it go.

Other long-running tenture films played here were Francis Ford Coppula’s THE GODFATHER that played at Charlottetown Mall from March 25,1972 until June 30,1972.(Not to mention THE GODFATHER:PART 2 played here too in December 20,1974 until February 17,1975) Not to mention the Charlottetown’s Reserved Seat Engagement presentation of John Huston’s THE BIBLE first-run in January of 1967. The original PLANET OF THE APES played here.

All the James Bond-007 films played here first-run and they had some great movies that did big business like “Star Wars”, “Raiders”, “Die Hard”,to name a few and some really bad ones too(I fondly remember the worst movie of the 1980’s “Disorderlies” starring The Fat Boys…and anything starring Pauly Shore,and a really bad comedy called “Up The Creek”,not to mention “Superman III”)

It was a grand movie palace that sat across the street from the Charlottetown Mall at the intersection of Kings Drive and Independence Blvd. that was in business from 1963 until 1994. Sad to see it go. Today,it is a business center. Thanks for replying.

I have the original grand opening ad from November 1963 and if you would like to see this and I be glad to sent it you. My e-mail address is posted at the top of the message. Thanks.

I can’t recall just how many films I saw at Charlottetown, but I do know that I saw Octopussy there (since you mentioned 007 movies), and I recall on that trip seeing the posters and standees in the lobby for Jaws 3-D and being petrified. Found out a year or two later how lousy it was on HBO. Unfortunately, although I did see Raiders of the Lost Ark in a theater, it was second run at the Regency on Albemarle.

Let’s not forget the Charlottetown’s original long-running engagement of ROCKY that played here from February 4, 1977 until June 30, 1977.

I lived in the orphanage behind the theater from ‘64-69 and we had a hole in the fence that we used to get to the theater. I remember seeing “Around The World Under The Sea” when it came out in '65. Thunderball was in the 2nd theater at the same time. 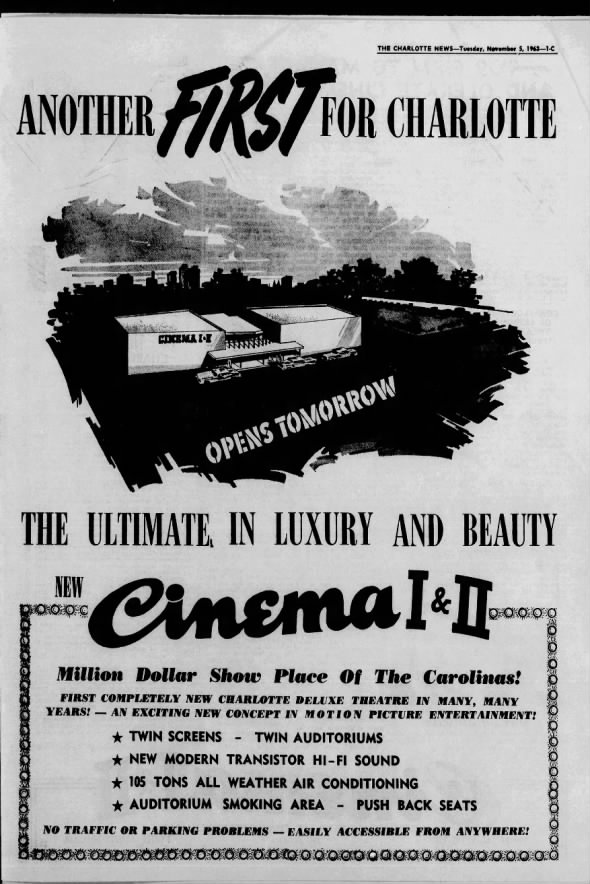 Three screens opened on May 14th, 1976 as the largest cinema was split up.