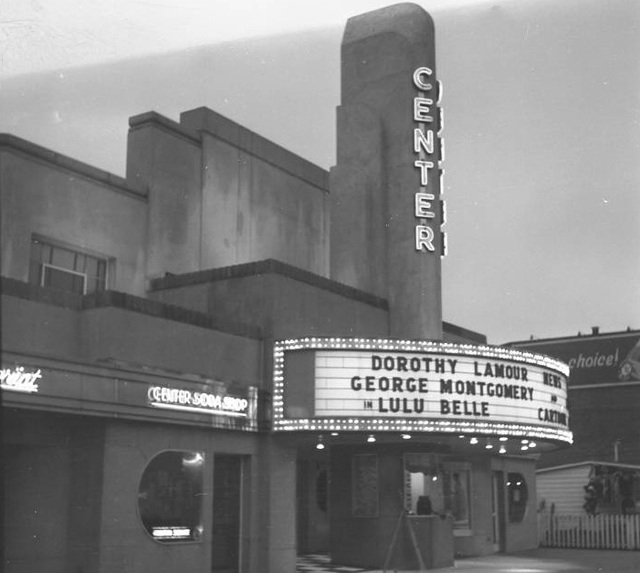 The 900-seat Center Theatre was built by H.B. Meiselman Theaters in 1948 and opened on October 7, 1948 with the film “The Saxon Charm” starring Robert Montgomery. As a neighborhood theatre it seldom got the blockbusters the downtown theatres showed. It specialized in smaller action films and black films of the 1960’s and 1970’s. In the 1960’s it was own by the Eastern Federal chain. In March of 1977 it closed, it’s future unsure.

Kermit High, a local manager of several other theatres, renovated and re-opened the Center Theatre in August 1977. Sometime in the early-1980’s the theatre was destroyed to build a small strip mall, which was destroyed in 2004 for the construction of a greenway.

The exterior was a wonderful funky Art Deco style. The theatre was located on the edge of the Myers Park neighborhood, across from the Charlotte Memoral Hospital (now Carolinas Medical Center). A twelve story doctors building used to be across the street. As I child I remember looking out a 12th story window down onto E. Morehead Street when I visited the eye doctor. There was the Center Theatre. I don’t miss the medical building, which has also been demolished, but I do miss the Center Theatre.

In reading through the Charlotte listings,it’s almost like some evil force decreeed the demolishing/destruction of the beauty and heritage once extant.NC has suffered more than VA.,and the remnants there are sadly few.When compared to Richmond and Norfolk,the NC cities look bare.Raleigh,Greensboro,Durham,Charlotte,etc.-you can count on one hand any notable bldgs left.Just between the 2 VA cities mentiones-it takes TWO hands.We have the grand Byrd,a bit of real time travel.For two bucks,it’s back to the future.Atleast you can go to Kannapolis,but it isn’t in the same league with the Byrd.

Here is one picture though not a full view:
View link
And here is one of my father, Edward Marks with two of his staff when he was the manager. Both photos are from around 1949. He worked for Herman B. Meiselman who built the theatre. (Meiselman’s company would become Eastern Federal Theatres as mentioned at top). View link
Mr. Meiselman sold the theatre to Stellings & Gossett about 1953 but at some point he bought it back. I don’t believe the theatre was across from Charlotte Memorial Hospital (now Carolinas Medical) but the hospital certainly wasn’t too far away. The old Boar’s Head Restaurant was located semi-across from the theatre.

The January 4, 1947, issue of Boxoffice Magazine said that Erle G. Stilwell was the architect of the Center Theatre. The rendering in the magazine showed a four-story business building as part of the project, but the photos at Flickr show what looks like a theatre without any upper floors. The project must have been scaled down. The rounded marquee is the same in both, though.

It was part of a small row of buildings & this was typical of Eastern Federal – building a theatre as well as some other store fronts to rent out. The theatre did have a second story where the manager’s office and restrooms were & I would guess a balcony too. It was often plagued with flooding problems due to its neighbor, Little Sugar Creek. I do have a photo of my father counting the money in the manager’s office. Will try to post it to my flickr account sometime within the next week. Thanks for the info about the architect!

With regard to my comment of March 11, 2009, I’ve found that the proposed Center Theatre in Charlotte designed by Erle Stillwell (rendering at upper right here) was never built, and was never intended for this Morehead Street location. Comparing the rendering to the photos recently posted, it’s clear that these were two different projects.

The Center Theatre on Morehead Street was apparently designed by Charles C. Benson. The only reference in Boxoffice citing Benson as the architect of the Center was an article in the issue of February 1, 1947, at which time the proposed Meiselman theater at this location had not yet been given a name, but the item said that Benson had drawn the plans for it. Later items in 1947 and 1948 report on the project and give the same location and general description of the building as the February item, and give the name Center.

Construction of the Center was delayed due to post-war restrictions on building materials, as was the case with many projects during that period, but I’ve found nothing to indicate that the original design by Benson was not carried out.

Patricia, you’re right – the Center wasn’t right across the street from Carolinas Medical Center, but just two blocks down Kings Drive.
When I was a little girl, my mother worked for radio station WIST selling air time, and two of her accounts were the Manor and Center Theaters. I got to see an awful lot of free movies!

firstmom1982 – my mother worked at WIST too (about 1970) but only for a little while. I remember seeing “Her Majesty’s Secret Service” at The Center – and being a young teen I found it very romantically-dramatic at the end – my mother, a fan of both Ian Fleming and Sean Connery panned it (as most of the critics did). I loved the upstairs of The Center. My father and mother were courting in the days he managed the Center – gave her a surprise birthday party there after hours.

Otto Preminger’s EXODUS was an Exclusive Carolina Showing Engagement at the Center Theatre on May 26,1961. It was the only showing of the film in the two Carolinas.

The Center theatre opened with “The Saxon Charm” on October 7th, 1948 by the Meiselman theatre chain. 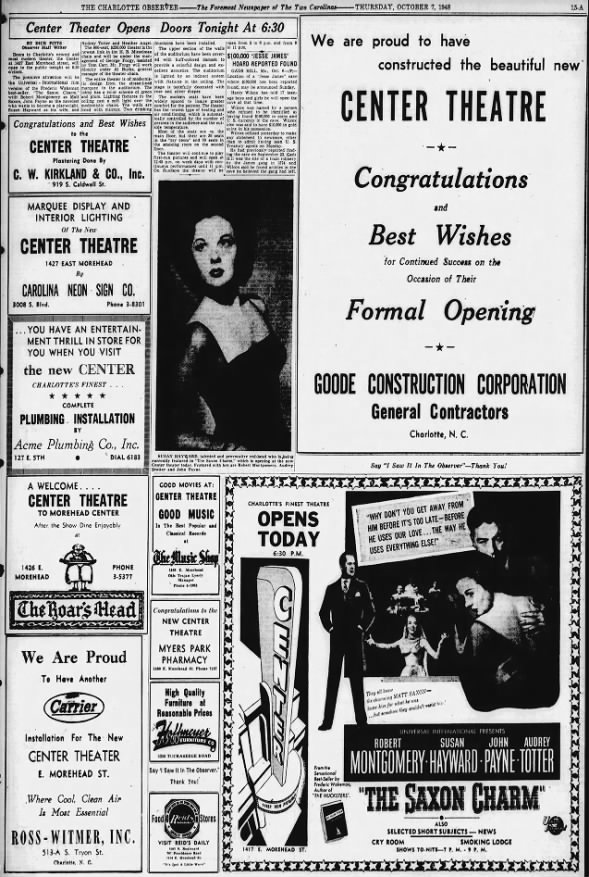