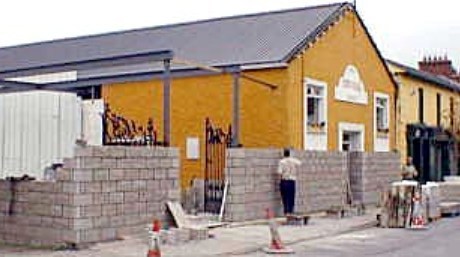 Located in Kilcullen, County Kildate. The Town Hall was officially opened in November 1933 and served as a cinema for over 30 years from the 1940’s to the 1970’s. Boxing tournaments, live shows and drama productions were also held in the Hall. Redevelopment of the Hall in the late-1990’s was spearheaded by local garage owner Pat Dunlea, and it opened as a new theatre on 31st December 1999. A new shell was built around the original hall assuring room for a new heritage area and the original projector from the cinema is on display in the foyer. The seats installed were of cream leather and reputed to have come from Volvo, who had used them in a makeshift theatre at a trade show in Sweden. The project was reputed to have cost £170,000. Unfortunately the Hall no longer screens films.