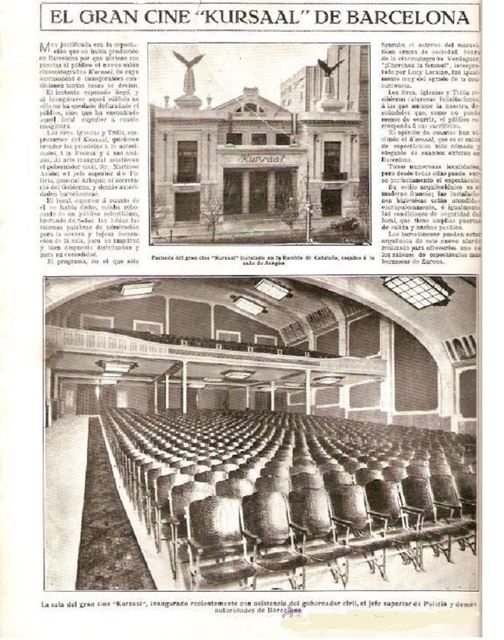 Located on the famous Rambla de Catalunya in the city centre. The Kursaal opened on 6th March 1910. It was a conversion of the Universal Ballroom and was operated by Fou Josep Balana and was designed by architect Andreu Audet. It was so successful that it was remodeled to reopen on 1st September 1911.

It was remodeled again to reopen on 10th February 1922 and the facade was given a Luis XVI Spanish Renaissance style. This lasted until 1939 when the cinema was remodeled yet again, this time in an Art Deco style, reopening on 22nd September 1939 with Deanna Durbin in “Three Smart Girls”. It recieved a makeover to the plans of architect Antoni de Moragas and was equipped with CinemaScope & stereophonic sound, reopening on 23rd September 1954 with Robert Wagner in “Prince Valiant”. Next came a Todd-AO installation when “Oklahoma!” was presented on 22nd September 1959. This was followed by “South Pacific”, “Can, Can”, “Cleopatra”, “The Alamo”, “Exodus” and “El Cid”.

The Teatre-Cinema Kursaal was closed on 19th July 1965 with Gregory Peck in “The Gunfighter”. What had been one of Barcelona’s main and most popular cinemas was demolished and a retail building with parking garage named Edifico Kursaal was built on the site.