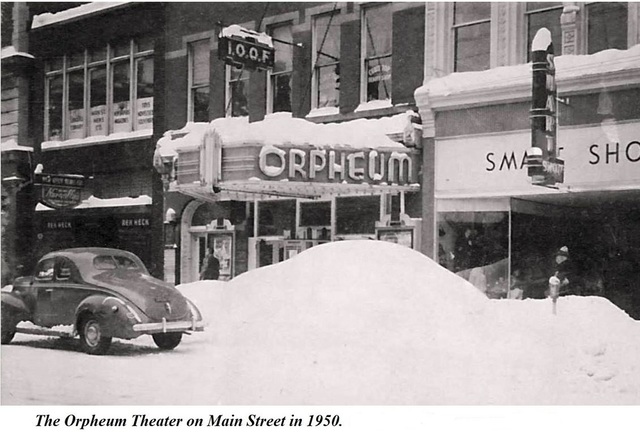 Clarksburg’s second Orpheum Theatre opened around 1911 as the Odeon Theatre. It originally featured vaudeville from the Gus Sun circuit, but in later years became exclusively a movie house. Around 1921 it came under the control of Jack Marks, who controlled several other theatres in and around Clarksburg, including the original Orpheum Theatre.

After Marks opened the Ritz Theatre in 1928, he closed the original Orpheum Theatre, which was converted into offices for the Monongahela Power Company. Around this time he moved the name Orpheum to the former Odeon Theatre, at first calling it Marks' Orpheum Theatre, and later just the Orpheum Theatre. He continued to operate the house until 1952, when it was closed. The building has since been demolished.

Ken Roe: Having rechecked my sources I now believe I conflated the histories of two different theaters on this page. The Odeon at 311 Pike Street did not become the second Orpheum. The second Orpheum was the former Bijou Theatre at 331 Main Street.

My careless reading of the following two paragraphs from this web page was the source of my confusion, which was aggravated by certain puzzling inconsistencies in the FDY lists for Clarksburg:

“In 1920, a theater that was at one time named the ‘Odeon’ and at another, the ‘Bijou,’ existed during the second decade of the 20th century at 311 West Pike Street, near the current location of Jackson Square.

“In 1922, after purchasing the Bijou on West Main Street, Jack Marks changed the name to ‘Marks’ Orpheum' and opened the theater continuously until the time of his death in 1952.”I now suspect that the house listed as the Bijou in FDY’s during the late 1920s was probably the former Odeon, and the first Bijou on Main Street, then operated by Jack Marks, was most likely the house listed by the FDYs of the late 1920s and early 1930s as the Main Street Theatre. Marks attempted to use the name Orpheum at the former Bijou in 1923, but a 1924 court decision awarded the rights tot he name to the new lessee of the original Orpheum, Claude Robinson. Marks was able to use the name Orpheum for his Main Street house after the original Orpheum closed.

The former Odeon was renamed the Bijou at some point in the 1920s, but it is not clear from FDY listings just when. Most likely it was when Marks started calling the original Bijou the Orpheum, and he ended up losing both names. The Odeon/first Bijou appears to have closed as the Main Street Theatre no later than 1931, in any case. It is not listed in FDYs after that year.

Joe: I too am confused now! Would you mind creating a new revised page for this theatre and I will then delete this page. Also please add a new page for the Main Street Theatre (Bijou/Orpheum). Thanks

I’ve been hunting down more information about the Odeon and the Bijou, and though I’ve found out that both opened somewhat earlier than I’d thought, I haven’t had much luck unraveling the confusion over the later names used in the 1920s. I’ll put together what I’ve found so far and submit the new pages as soon as possible.