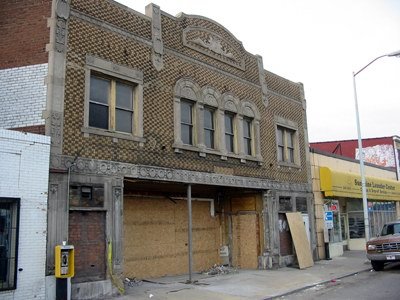 The building seems to have been renovated by the Sunshine Laundry Center, next door. At least it hasn’t been ripped down.

My grandfather Al Johnson’s theater slides include two exterior shots of the Graystone Theatre taken in December 1949. His son’s list of Johnson theater projects does not include the Graystone so it’s not clear what year a Johnson job might have been completed.

The Graystone Theatre is in an older building, but in the 1949 images the entrance appears to have new doors and a new front. The red porcelain-like tile material used on the front of the building is typical of Johnson-built theaters. The overall style of the building entrance and marquee suggest to me to have been done in the 1930s.