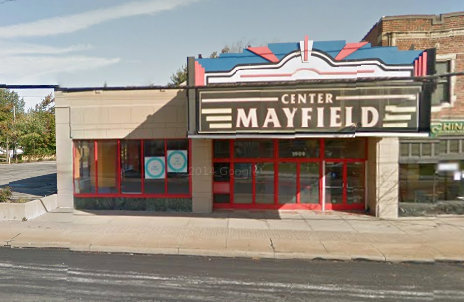 Opened in 1936 with 1,200 serats, the Center Mayfield Theatre, which was a sister theatre to the Cedar Lee Theatre, was a neighborhood theatre near the Cleveland Heights/South Euclid border. The theatre had shown mainly sub-run fare for discounted admission.

It was later tripled bfore it closed around 1996, and became a Hollywood Video store. Hollywood Video also used the former Center Mayfield marquee for advertising new release videos and DVDs. The building was demolished in January 2017.

The 600 figure was for the middle screen after it was made into three. Sylvia Sheer (hope I got the name spelled right) was the manager of it after the Vogue closed. I was a good friend of hers. The center mayfield had a different owner from the Cedar Lee when it was build. The Cedar Lee was origially owned by Community Ciruit. I worked for the Cleveland Press and know most of the theater managers in Cleveland.

Saw a number of films here during my college years in University Circle. A couple I’ve always remembered are “Bonnie and Clyde” and “The French Connection”. I think the latter played here during its first run.

There was an Int'l House of Pancakes (early IHOP) across the street, and somewhere in the area, a Royal Castle (White Castle style joint popular in the 1960s). I mention these because they’re inseparable from my movie-going memories here.

There is a photo of the auditorium of the Center Mayfield Theatre at the upper right corner of this page of Boxoffice, November 14, 1936.

I grew up about two miles away, within walking distance. I remember ~1975 one Saturday they had a Planet of the Apes marathon and we hung out at the theater the whole afternoon. Another memory was seeing the original Carrie film in a packed house on a Saturday night, with the whole audience jumping in reaction to the dream sequence at the very end. I miss that kind of communal movie experience (along with the grandeur, huge screen and sound of the old theatre). The bathrooms were upstairs; you walked up the Art Deco steps that split to separate staircases; the bathrooms had one of those old scales with the mirror that “told you your fortune.”

I actually worked there when I was 18 (1981), taking tickets and watching the parking lot across the street sometimes. The original theatre was intact then; I was told the seating was 1400 but that may be incorrect based on other postings here. I visited the video store in the early 90’s and the public space of that store only encompassed the front ‘ramp’ and lobby space, blocking off the actual theatre space. I know they auctioned off seats and such before then but I never saw the theatre space after it closed. Probably just as well!

Grew up about 6 blocks from the C-M…on Parkhill. Saw my first horror film there with my dad (after he gave in). The Giant Claw and Jet Pilot…double header sometime around 1956 or 1957… Didn’t sleep for two weeks! I recently found the Giant Claw on a movie download site and showed it to my grand kids… They loved it – at first but then said that the bird was really creepy.

Have not lived in Cleveland for many years, but lived on Inglewood Drive, about 2-3 miles from the Center Mayfield in the 1950’s. Went there often in the summer months to get out of the heat (“Cooled by Refrigeration”), as none of the older houses in Cleveland Heights had air conditioning. The Center Mayfield was still in pretty good shape in those days, though the seats were likely original, and were pretty worn. In my High School years, I lived in Pepper Pike, and one of my neighborhood friend’s dad used to leave for work a bit after we got home from school everyday. He always wore a Tux to work, so finally asked my friend, Bill, what he did for a job. Turns out he was the Manager of the Center Mayfield!

Though there were theaters closer to home, went to the Center Mayfield several time in the 1960’s, watching the movie from the projection booth several times. As I recall, the had two older projectors (either Century or Simplex, and an pretty old Altec sound system (likely feeding one or two Altec Voice-of-the-Theater speakers). In 1964, I was actually able to (secretly) plug into that sound system and record the entire soundtrack of Goldfinger on Reel-to-Reel tape (Goldfinger was likely in it’s 2nd or 3rd run by then)… Also was able to get two large Goldfinger posters, as the movie was old enough that distributer wasn’t too picky about getting them back. Of course, the poster that I really wanted was the 3-D acrylic poster for 2001, but that one, they definitely wanted back.

My most vivid memory of the Center Mayfield was going to see “A Hard Days Night” the 2nd or 3rd day after it opened. This was the only time I can remember the C-M actually being sold out! We sat through the movie twice (you could do that in the 1960’s), but still had absolutely no idea of any of the dialog of the movie. The volume of a packed house of screaming girls totally drowned out the little Altec sound system!

Sorry for getting carried away with this commentary, but seems such a shame that most of these classic movie houses are in ruins. Here in Orange County, California, the Fox in Fullerton, is slowly coming back to life. It had four feet of water in the “pit” when they started!

Any of you still in the area have an update on Cleveland Heights or the Center Mayfield????

I was an usher at the C-M and worked there while in high school. Joe Rembrandt owned the business and Byron “Barney” Byrne managed the house. At that time, it had a single screen with about 1200 seats. There was a large area behind the screen and we would hang out there while the movie ran – the screen acted like a one way mirror, we could see the audience, but they couldn’t see us. Next to the projection booth was a storage room full of old movie posters and stills. I recall cleaning it out and taking many old posters home with me. Next to the manager’s office was the candy storage room. Needless to say, it was our favorite place to sneak into when the boss wasn’t around. I worked there when it was a second run house but we still ran such great movies as Tommy, Blazing Saddles, Logan’s Run, That’s Entertainment, and The Giant Spider Invasion – starring the skipper from Gilligan’s Island. As of January 10, 2017 demolition of the building has begun. I’ve been told a Circle K wants the lot.

Would like to buy some original seats from theatre. Any survive, and help locating would be appreciated.

Wish there was a way to change the info on a theater as this was a single screen theater with 1200 seats way longer than it was a triplex. I know it didn’t go triplex until 1988 at the earliest.

One of the great things about Mr. Rembrandt the theater owner was that he started movies on time. Didn’t matter if there was still a crowd waiting to get in, he started the film (or, later, the previews).

Grew up 3 blocks from this theater (Middleton Rd.). Saw something like 90% of all the movies I viewed there until I was 16 and had access to a car.

Hey, Frank. The seats from the Center Mayfield went to the (former) Dobama Theatre space on Coventry Road in summer, 1995.

Interestingly, when Dobama moved to its new space on Lee Road, it received a complete set of seats from the short-lived Centrum Theatre. No word on what happened to the Center Mayfield seats, but I guess it isn’t difficult to imagine they were scrapped.