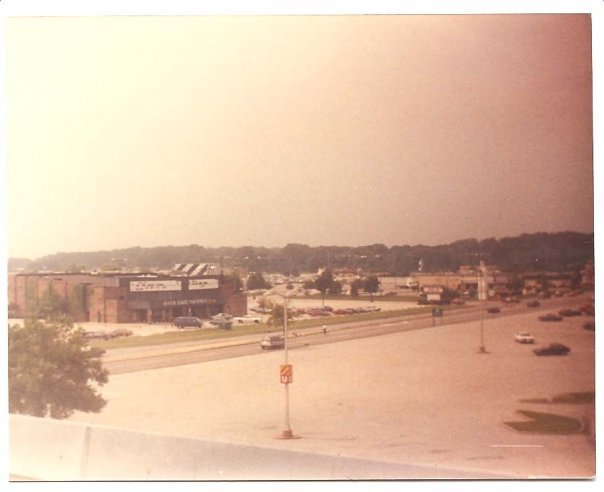 River Oaks Theater 2 opened August 11, 1972 by Plitt theaters. It was located across the street, just west of theater 1. It was less spectacular than theater 1 though still nice. It could seat around 500 people and had the curtain that opened from side to side. The seats were normal and not rocking chairs. It’s premiere attraction was “What’s Up Doc?”.

On June 27, 1975 screen 3 was built in the same building as screen 2. The premiere attraction was “Once Is Not Enough”. It also sat 500 and the only difference was the curtain opened and closed vertically. These two screens were known for playing films that Northwest Indiana would either not get for months or not at all.

As far as I could tell the theaters always did big business but the two screens were closed in 1989. Soon after a Silo electronics store moved in. The theatre had been gutted but the shell of the building still remains. Office Depot now occupies it.

I recently ordered a copy of the original souvenir program for “The Empire Strikes Back.” Upon opening it, a ticket stub with the address “1370 Torrance Avenue, Calumet City, IL” fell out. The ticket says River Oaks Theater 1 on it. But theater 1 was on River Oaks Center Sr, across the street from Torrance Ave, right? Was there a “theater 1” at the two-plex on Torrance Ave? Looking at the page for the original River Oaks single-screen theater, I’m more apt to believe “Empire” screened there instead of the two-plex. Can someone clear things up?

Hey Flix70 – For future reference you can look back at the previous comments. I have listed the bookings for theaters 2 and 3 from their openings thru 1981. According to the list “The Empire Strikes Back” opened on screen 3 on September 26th of 1980. It originally opened on screen 1 so it appears it moved across the street to this theater as the crowds had likely lightened up. You can also see bookings for theater 1 and 4 on their individual pages as well.

Thanks, JRS40. Would a ticket, though, for the Torrance two-plex say “Theatre No. 1” on it? I wasn’t sure how the auditoriums were numbered, especially since this theater was called 2 & 3.

I posted a photo of the ticket for reference.

No the ticket wouldn’t say that. That ticket is for theater 1 clearly. #1 and #4 were one building and #2 and #3 were on the west side of Torrance Ave, just down the block slightly North. I hope that helps.

This opened on August 11th, 1972. Grand opening ad in the photo section

Map of all the River Oaks theatre buildings in the photo section. It is the blue building.

The Theatres 2-3 building didn’t become Circuit City. Circuit City was on East-West Road in a new development that included a Target, tucked behind Venture off Ring Road. Theatres 2-3 might have become a Silo (Marshall Field’s brief venture into electronics retailing) — that might be the confusion with CC.

I don’t think I ever went there when it was a single only as a twin but it does not surprise me that it was originally just a one screen. My question is whether it was a large single and then divided (probably) or did they add on to create #3.

After the renumbering it carried 13-14 (the highest number) as opposed to those numbers being assigned to the old 5-6 on the far side of RO-West. Presumably the property lease was coming up and they knew it was going to close. I don’t recall what appliance store was in there—someone mentioned Silo. Could also have been a Fretter. But that did not last long and the building was razed to make way for new development.

They definitely had 70mm on one side as I saw with my own eyes how on the first week of Raiders they shared the 70mm print with #1 and the ushers were ferrying the reels (doubled up for 35-40 minutes) back and forth across the street, something that is possible with reel to reel projection not platters. #1 was still carbon arc at that time. Too bad #4 didn’t have 70mm projection as it would have made it a lot easier.