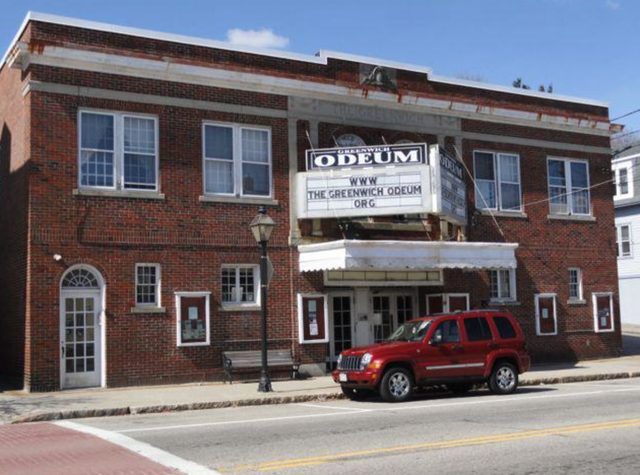 The Greenwich Theatre originally opened as a vaudeville house in 1926. It changed soon after to a motion picture theatre and showed movies right up until it closed in 1990.

A non-profit organization took over, renovated it, and renamed it the Greenwich Odeum. It reopened in 1994 as a performing arts center and was exclusively run by volunteers. It was closed in 2007, when new fire regulations came into force. Funding to finance the upgrades required was raised by volunteers, and it reopened on January 26, 2013. Classic movies are now part of the program.

One of the last movies, if not the last,that I saw there, was The Natural with Robert Redford. That was on June 29, 1984.

I went back to the Greenwich last night, my first visit in over twenty years since it became a live-act theatre. The occasion was the R.I. Jewish Film Festival’s showing here of King of the Corner by and with Peter Riegert. I used this opportunity to see what the interior of the theatre was like. I had all but forgotten.

I suspected that probably the showing would be a DVD projection since I guessed also that the 35mm equipment and large screen that used to be here were long ago removed. I wasn’t wrong. A rather tiny screen was set up in the middle of the stage and the DVD was shown by rear-projection. I must say I enjoyed the film, which also stars Eli Wallach and Isabella Rossellini, though disappointed at the limitations of its presentation. But then this place does not normally show movies any more in any format and was simply rented for that purpose by the Jewish festival group.

The original projection booth still stands, but I was unable to detect any equipment behind the portholes. I was amazed at the width of the stage, which runs the whole front of the theatre, minus the two exit-door areas. It must be forty feet wide or more. A fire notice says the theatre’s capacity is 541 persons. The walls of the theatre were painted a light yellow and were peeling in spots. I seem to recall a darker wall motif in the theatre’s movie days. The seats, survivors of many decades, were generally tattered and weatherbeaten. There was a large comfortable amount of leg room between rows. I think the rows may have been re-spaced when the theatre stopped showing movies. There are added platforms with stage-lighting equipment.

The look of the theatre’s interior is essentially bland and banal, with no distinguishing decorative features of any kind. The exterior of the theatre, on the other hand, is appealing in a classically simple way, with a handsome brick fronting and an attractive canopy over the entrance, beneath a small marquee. The entrance area, where the ticket window is, is an inviting place and is lined with autographed photos and posters of previous performers here, including Claire Bloom. In one nook, a poster/flyer survives and promotes the movies of a week long ago in 1935 when one of the films was Mutiny on the Bounty.

The 1949 Film Daily Yearbook listed the seating capacity as 626.

I have fond memories of the Greenwich AND the Palace in West Warwick. I took the Moller Theatre Organ out of the Greenwich in the seventies. One morning the custodian said that there was a room at the Palace in West Warwick (Arctic) that had a whole bunch of these pipes.
A friend and I checked it out. They were showing “Patton” at the time.
We found a four rank Wurlizer and removed that, also.

I should add that the Kent, Greenwich, Palace, and the Greenwich Drive in were all run by branches of the Erinakes family. Steve, one of the sons, currently runs the Odeum.
I believe that the Erinakes' may still run some theaters in RI.

Anyone know if/when this theater closed? It’s website is gone and it’s phone is disconnected.

It closed in 2007 due to stricter fire regulations for venues that hold over 300 in the aftermath of the Station night club fire. The law was just revised to cover venues over 500, and the Providence Journal reports today that it will be reopening soon.

A Providence Journal item on May 19 indicated that there would be a fundraiser on June 3 to benefit the Greenwich Odeum Theatre. The venue has been closed for several years because it could not meet new stricter fire codes in the wake of the 2003 Station Night Club fire in West Warwick.