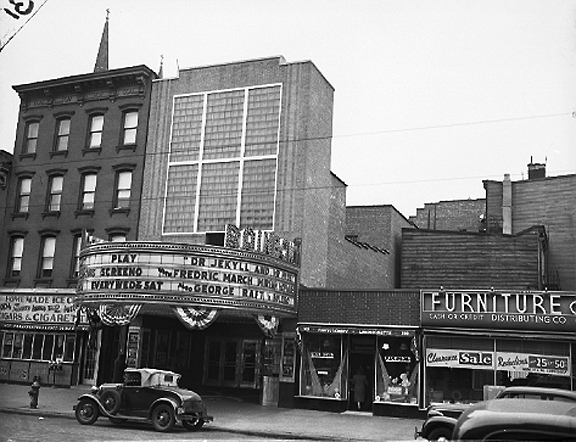 Built by the Randforce Circuit at a cost of $240,000 (not including the price of the underlying land), the Rainbow Theatre was one of the few large theatres to be constructed in Brooklyn during the Depression era. Though the double-features were subsequent run for the Williamsburg area, Randforce seemed to be relying on architect Charles Sandblom’s ultra-modern style to draw crowds.

To suit its name, the Rainbow Theatre had a two-story space above the marquee that was built of translucent glass bricks with lighting machinery behind it that created rainbow effects in constantly changing colors. The rainbow motif was repeated in the auditorium, the ceiling of which had a central cove with multi-colored lighting. Each side wall had a tall, false window with real drapes but providing a painted view of lush countryside, with a rainbow in the sky background. Patrons were supposed to feel like they were sitting in a posh living room. All of the 1,746 seats, most of them on the ground floor, were the oversized ‘Opera Style’ made by Ideal Seating Co. The balcony, was was almost at the rear of the auditorium, had only a few rows of seats to provide for space for a lounge area and restrooms.

Due to the penny-pinching of the Randforce circuit, the Rainbow Theatre was rarely advertised in the daily newspapers, so it’s difficult to chart its history. I think that Randforce operated it until 1964, when the Rainbow Theatre closed. In 2002, I found the theatre still standing and being used as a evangelical church that was closed at the time of my visit. The glass brick area above the entrance was still there, but with quite a few bricks missing. Pigeons were roosting in some of those spaces.

In June 2012, work commenced to convert the building into apartments, and it was gutted internally and the roof was removed. The front entrance was demolished.

In looking at the very depressing pictures that Williamsburg 145 look last summer, it is certain that the old Rainbow is no more. The central facade, which could have been a grand entrance, was totally destroyed and what was constructed seems to be new work. So, I guess the “Demolished” label needs to be applied here. RIP.

If you want to feel sick, you can check out these pictures in the photo section. But be forewarned.

John, while I agree with you, it’s sickening….that said, it isn’t really “demolished”, as they are building the new construction within and above the shell of the old theater building, so while it’s been shelled to the bare bricks, and pulled back a little, the original shell of the base of the first few floors of the new building are in fact still the walls of the old theater. “Demolished” is not accurate…although if there was a setting for “semi-demolished”. It’s somewhat similar to the complete shelling of and partial destruction of the old Oasis theater on Fresh Pond Rd, although in that case, no new construction was built into the old building yet, even if the entire Fresh Pond facade, as well as the lobby half of the building were demolished.

Bway, it really is the same situation that would exist if they destroyed the Ridgewood’s facade – which, thanks to Landmarks Preservation, they cannot – and then built anything they wanted to build within the remaining shell. In this sense, the Rainbow presents the worst of both worlds.

I couldn’t agree with John more. The shell that’s left bears no connection to the neighborhood gem that along with the Alba, the Commodore & the Republic afforded Williamsburg a respite from the hardships faced during the Depression & WWII. At least the twin spires of John’s alma mater, MHT remain in the background watching over the dwellers of remaining tenements and now the condos.

Again, I totally agree with both of you….just that the above can’t be changed to “demolished”, as it wasn’t demolished in the same way the “Commodore” was. That said, it doesn’t make it any better.

I visited the site over the past weekend. It looked dreadful. It appears that they have demolished most of the site and only the front area – which has already been separated from the rest of the mostly demolished building and may soon experience a similar fate – remains for the present.

This development, in short. represents the worst possible alternative that the old Rainbow could have experienced.

Sorry to be the messenger on this.

Attended a family funeral at nearby, majestic Holy Trinity RC Church. There is a gaping hole from the corner of Meserole St/Graham Ave, to where the Rainbow once stood. Despite the highly touted gentrification of the area, it all seems quite desolate without the Rainbow. Similarly, the Broadway site where the Commodore once stood also remains undeveloped.

Astyanax, that is incorrect. There is an apartment building where the Rainbow lobby used to be on Graham. If you type the address into google maps, and look at the street view, you can view various years of google images of street view, dating back a few years to when the building used to be there. The Rainbow Clothes shop next door to the former lobby entrance is the vacant “gaping hole”. https://goo.gl/maps/nr9iriNwbnL2

The same can be said of the Meserole side of the building where the auditorium once stood. Completely built on.

Chris, thanks – I guess – for leading me to the Google map of this site. It is awfully depressing. Something that really could have added to the beauty of this area has wantonly been destroyed.

On the other hand, it was great hearing from you and I hope you are doing well.

I am discussing the old days with my 85 year old mother who tells me she was a candy girl at this theatre in 1947. More importantly, she is a relative of Manny Frisch who was the son of Louis Frisch, the originator of Randforce which built this theatre.