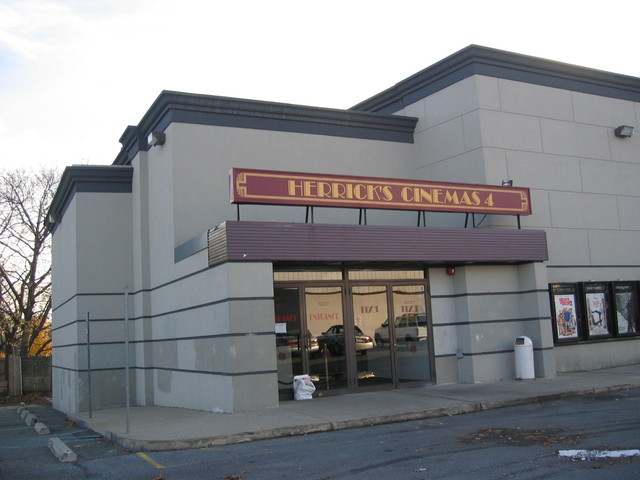 Tiny neighborhood house built in the back of a small strip mall sometime in the 1960’s. The previous owner GG Theatres twinned it in 1984 and went first run after many years of discount double bills. Acquired by Clearview in 1996 they somehow broke each side in two and made it a quad. In June 2013, Bow-Tie Cinemas took over as it took most Clearview locations. It was closed on March 16, 2020 due to the Covid-19 pandemic. By October 2020 it was still closed and had been dropped from the Bow-Tie Cinemas website.

As of October, 1985, RCDTJ, GG’s Long Island empire also included the Old Country Twin in Plainview. See the ad I posted above on Aug 23rd, 2006.

I knew I was missing one. LOL. Thanks Ed.

I was never in this theatre but wandered around the exterior one day shortly after it was opened. It seemed really cheaply contructed from the outside.

I worked at this theater as an usher when I was in high school in the early 90’s. At the time, the theater was a twin and both screens while tall in height, were rather narrow. Overall, the theater was very small and a bit run down, so I can’t imagine how they managed to squeeze in an additional two screens. For some reason, this theater always did well, at least when I was there. It was the perfect template of a neighborhood theater… loyal patrons with near sold out crowds on weekends and a respectable showing on weekdays.
At the time, it was under the control of the “GG Theaters” chain, which owned by Mr. GG (I have no idea what GG was short for), who was a bit of a character. His main hub was the Port Washington theater and also ran a theater in Baldwin. He was Israeli with a strong accent and not much of a personality. He would call for the totals on most night and occasionally pop by to grace the theater with his presence.
The theater was managed by an eccentric older woman named Ruth (or Ruthy) and she was entertaining to say the least. She had a bit of a foul mouth and would have no problem insulting patrons of the theater if they somehow pissed her off (like complaining that the sound was too low or loud). If you were nice to her, she was nicer to you… but if you pissed her off in some way… watch out! Her daughter Joanie was an on and off assistant manager and she had a real sour disposition and unpleasant to work with. The rest of the crew was rounded out by teenagers mostly. We had some fun changing around words with the marquee on random late nights and would often change the answering machine to that of a gay porn theater… but only for a couple of hours at night.

@Tom Brennan — i too worked at this venue in high school for a time, and i think we may have worked together. i remember Ruth all too well…she was a real piece of work.

That’s funny Sean, we probably did! It was a unique experience to be sure. I have great memories of working there and the funny characters that both worked at and frequented the theater. I also remember Steve, the projectionist, who was a great guy and a lot of laughs for us teenagers. I was there from early ‘92 till about late ‘93.

This theater is off the Bow Tie netsite.