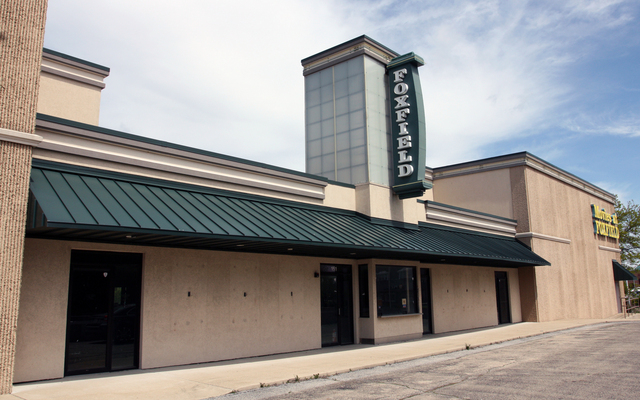 The Foxfield Theater was opened in December 23, 1977 as a triple screen theater, by Essaness Theatres. The largest screen had 700 seats, and this was later twinned, making it a four screen theatre. It was taken over by Cineplex Odeon in the 1980’s. In 1999, the Foxfield Theater was acquired by the Classic Cinemas chain, and expanded to seven screens, with stadium seating added.

The Downers Grove-based Classic Cinemas operated the Foxfield Theater for about two years, before it was shuttered in 2001, around the time the chain took over the 18-screen Charlestowne Theaters at Charlestowne Mall in St. Charles. (Classic Cinemas also closed its other St. Charles movie house, the vintage Arcada Theatre, when it closed the Foxfield). The Foxfield Theater remained unused until it was demolished in April 2015.

I used to work here………and I live in St. Charles……it has stood vacant for many years now I’m surprised they haven’t demolished it or something. I worked here right after they remodeled it, it was pretty nice inside……..it doesn’t pale in comparison to the new theater……and it isn’t what I would say a jewel either……it kinda reminds me of the 80’s so it’s really nothing too special. I remember when I was a junior in high school (right before it was closed…..and right after) they used a good portion of the parking lot as overflow parking for St. Charles East High school (back then it was JUST St. Charles High School) I hope they just demolish it or convert it into something else….it’s wasting space…..

If you want to see a jewel of a theater, make your way a little farther (about 2 miles) west on Rt. 64, to the Arcada Theater. It’s beautiful inside!

In response to Paul Fortinis comment about CC renovating and then closing…….I don’t think they cared……the Foxfield was bringing CRAP next to what the newer Charlestowne 18 brings in…..even though the new one at the mall is all bells and whistles and is really not a jewel or anything, its an AWESOME theater for the area, before it’s existence we had to go all the way to Schaumburg or Warrenville to get a really good movie experience. But ya, I really don’t think CC cared that they would lose money perse……..they got a brand new theater which they didn’t have to touch with renovations…….and made a HELL of a lot more money on it!

I think the Foxfield theatre was a very nice location after Classic Cinemas renovated it. The seven screens with all new equipment and Stadium seating were a great place to see a show. Sure it wasn’t the historic Arcada theatre which Classic Cinemas also ran, but very nice for a modern theatre. I am not a big fan of Stadium seating, even though I’m only 5'7", but the seating at Foxfield was great. There was plenty of width and leg room larger then I have ever seen in any auditorium before or since. The biggest problem this theatre had was being hidden behind a liquor store. As to the events behind it’s closing, let me set a few things straight. At the time of the renovation Classic Cinemas also operated the Arcada theatre. Regal cinemas had contracted to build a theatre in the mall. Classic Cinemas hoped that by renovating they might deter Regal from building since the population base really could not support that many screens. Dispite this, Regal broke ground and built the Charlestowne 18 confident they could outlast the competition. With now 26 screens in town, and splitting the product between the 3 sites, both companies were feeling the financial pinch. The financial overhead of operating an 18 screen proved to be more then Regal could continue and they closed shop. Shortly after that, the mall management company approached Classic Cinemas about taking over the Charlestowne 18. One of the conditions would be closing both it’s current sites. At about the same time, the Franks (who owned the Arcada building) decided they wanted to change the venue to more live theatre. With Classic Cinemas lease about to expire it worked for both to not negotiate a new one. With the prospect of continuing at the newly remodelled Foxfield and risking a new competitor taking over the Charlestowne, or taking over the Charlestowne and closing the Foxfield to be the only movie theatre in the market, Classic Cinemas made the move to the mall. After a few monthes of adjusting managerial style and fixing mechanical problems in this relatively new building the Charlestowne started to actually show a profit. Today business is booming at the mall. As for the Foxfield building, after the theatre closed there was speculation the high school might buy it to expand their campus. This appearently never happened. I don’t know the current status of the building.

Go to www.images.google.com and then click on “maps”. Then click on
“satellite”. Enter the theatre’s address and zoom all the way in. The abandoned Foxfield Theatre is just above the green arrow. It is a very good image. You will see the abandoned parking lot to the west (left) of the building.

Anything ever happen to the Foxfield? Is it still sitting abandoned? Maybe someone could reopen it as a second run, ala Picture Show at Bloomingdale (f.k.a. Bloomingdale Court).

Timeline correction: Essaness opened Foxfield as a triplex in December of 1977. Theatre # 3 was a very wide 700-seater, which was split in the 80’s. Foxfield came under the Cineplex-Odeon banner in 1986 when C-O purchased the Chicago-area Essaness locations.

Sad to hear that it’s been demolished.

This opened on December 23rd, 1977. Its grand opening ad is in the photo section.