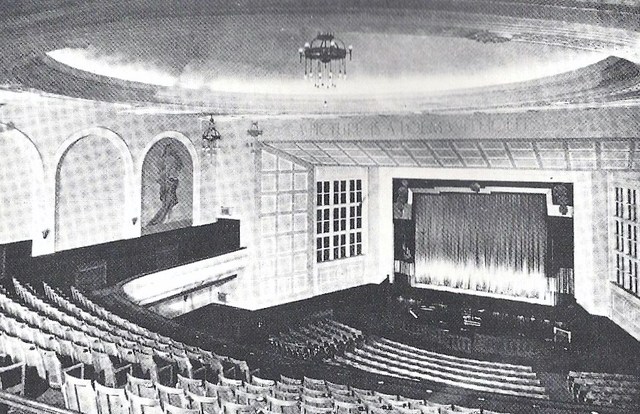 Opened on 9th September 1928 with the silent film “Lonesome Ladies”. The Carlton Picture Theatre in Anlaby Road was designed by the firm of Blackmore & Sykes and was built by Messrs. Greenwood and Sons. It was run by Hull Picture Playhouse Ltd.

This was a lavish suburban cinema, with an elaborate green and gold sliding dome utilising Venetian glass and housing hundreds of concealled lights. Roman marble mosaics and painted plaster panels on the walls added to the sense of occasion engendered by a trip to the flicks. A Fitton & Haley organ was installed, but this was later removed to the more central Cecil Theatre and was destroyed when that theatre was bombed during WW II.

The cinema had two entrances, one in each of the two towers on the front corners of the building. Above the proscenium was the inscription (rather inapt given how soon “talkies” arrived) “A Picture is a poem without words”. There was a single balcony and, for its date, a surprisingly large car park.

It continued unaltered (save for minor war damage) until its closure in April 1967, after which it was simply converted to bingo usage which continued as a Mecca Bingo Club until 2008.

A couple of recent interior shots are here:–

It has now closed and is boarded up. Mecca signage has been removed