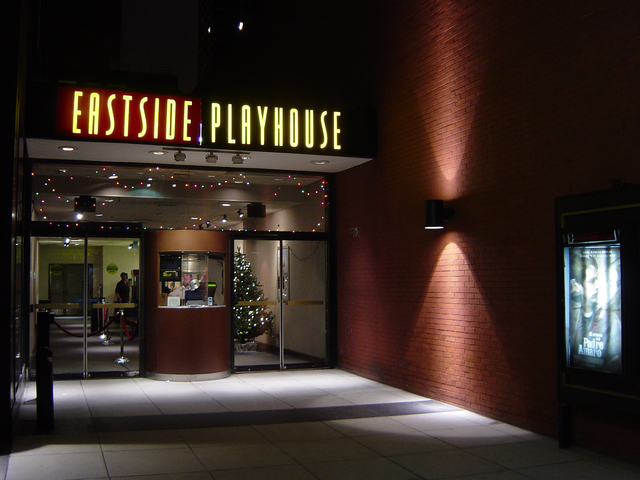 Opened by United Artists on January 21, 1973. UA closed it in 1992. It was closed almost a year before being remodeled and reopened by an independent. It soon became a City Cinemas Theatre until it was closed in 2003.

UA did run some quality films here and some offbeat things like “Sextette”. The last go around as the Eastside Playhouse saw some quality art bookings since the remaining eastside houses are pretty much first run mainstream.

This intro needs to updated.

By the photo of the entrance it looked rather plain.

Unaccompanied, I saw “Word Is Out” — the greatest gay/lesbian consciousness-raising film ever made — there in the spring of 1978. It was commercially courageous, even in cosmopolitan New York, to show such a film in that era, and I was so blown away by by this title that I went back for a second screening on another day. It was even better the second time around. Seeing “Word Is Out” (soon to be released for the first time on DVD in spring 2010) was for this viewer a kind of life-changing event and I’ve always identified the joyous experience of the film with its venue.

Saw Steppenwolf, The Return of the Pink Panther, Moonstruck here…probably a couple of other pictures

Well, I always knew this theater as Eastside Playhouse. It had a bit of a old-school feel with a ticket window at the sunken entrance and a long, narrow auditorium. I saw quite a few films there actually. Last one I recall was The Others… Now it’s a giant carpet store, sadly.

I want to the staff / cast screening of “Day of the Dead” here at the end of May in 1985. It was a private screening. A fantastic night overall. My first time to meet director George Romero. This night is written about in the book, “The Zombies That Ate Pittsburgh” by Paul A. Gagne.

I was very little but I remember seeing Great Mouse Detective and a rerelease of Cinderella here. It looks pretty much the same but it’s now a rug shop.