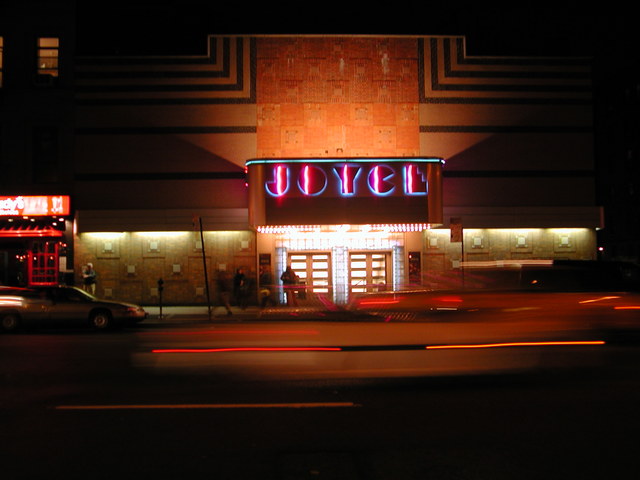 This former Chelsea movie house opened as the Elgin Theatre in 1942, designed by architect Simon B. Zelnik in elegant Art Moderne style with seating for 600. It was located on 8th Avenue, at W. 19th Street. By 1950 it was operated by Ligget-Florin Booking Service. Later, the Elgin Theatre screened Spanish-language films, and still later, revival and cult films as the Elgin Cinema. The Elgin Cinema ended its movie house days in 1978, briefly as a gay adult theatre. However, even as an adult theatre, midnight movies, including “El Topo”, “Pink Flamingos”, and “The Rocky Horror Picture Show”, continued to be screened.

In 1982, architect Hugh Hardy was hired to convert the completely gutted interior of the Elgin Cinema into a 472-seat dance performance space, while preserving and restoring the beautiful Moderne style façade and marquee of the theatre.

The venue was renamed the Joyce Theater, for the daughter of one of the main benefactors of the renovation of the theater. Today the Joyce Theater is considered one of the city’s main dance performance spaces, and hosts audiences of over 140,000 each year.

This article reports that the Joyce’s current principal tenant may have to leave due to proposed rent increases though apparently the name of the theater would remain the same: View link

If the theater is vacated by the dance company I am sure the building will be torn down and a new apartment complex will take its place. It’s sad but given the value of the land it is no surprise. I have no inside knowlege and am merely making an assumption.

I would have to agree with you, Willburg145. Particularly since the interior was gutted and only the facade remains intact.

I am looking for a photo of the old Elgin Theater for a documentary. Might anyone have one? It would be hugely appreciated. Please let me know at: . Thanks!

Every time I attend a dance performance at the Joyce I always think of the Elgin. Among the many movies I saw there I will always most strongly associate this theater with the first time I saw “El Topo.” Never saw ‘Rocky Horror" there, having burnt out on that experience at the 8th St,. Playhouse.

A chapter devoted exclusively to the Elgin is included in my recently published book, “Repertory Movie Theaters of New York: Havens for Revivals, Indies and the Avant-Garde, 1960-1994.” It’s listed on Amazon and www.mcfarlandpub.com.

R.I.P. Ben Barenholtz, owner of the Elgin May 1968 until pushed out by the building owner sometime in 1975. It was Ben who first decided it would be a good idea to run “El Topo” at midnight, thus beginning the “midnight movie” cult film craze. He followed it up with “Pink Flamingos” and “The Harder They Come”. Ben ran the theatre with Chuck Zlatkin and Steve Gould as his managers during a great era in repertory exhibition. He later began Libra Films, and was the first distributor of David Lynch’s “Eraserhead”, perhaps the ultimate midnight movie, and went on to start Circle Releasing, another speciality film distributor. Ben died in Prague on June 27, 2019, at age 83.