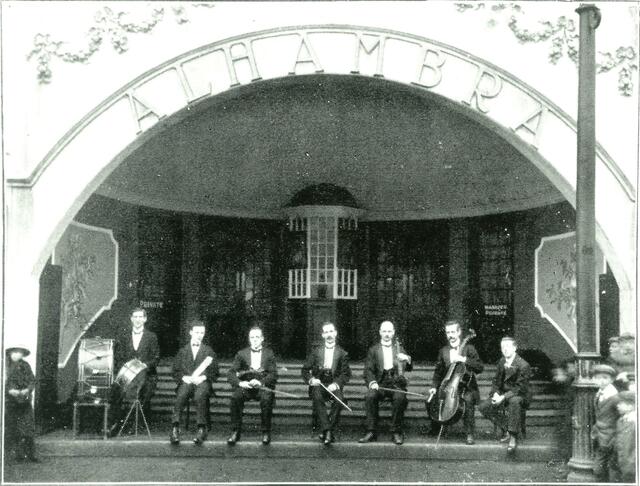 In the Hunslet district of Leeds, the Alhambra Picture Palace was a very short-lived cinema. It opened on Monday 7th April 1913 with “Life of Christ”, advertised as “The Greatest Coloured Film of the Age”, supported by a ‘Full coloured programme’.

He was clearly a man of many talents, for not only did he also play in, and conduct, the cinema’s ‘Lambra’ orchestra, he was also a film producer and screenwriter. His films include “My Yorkshire Lass” (1916, his first) for which he was producer, scriptwriter and actor, “Nearer My God to Thee” (1917), written by Herbert Pemberton but produced by pioneer filmmaker Cecil Hepworth, and his major success, “Bonnie Mary” (1918), which starred Miriam Ferris as a kind of Highland Juliet caught up in a family feud. (Unfortunately, none of his films are thought to have survived.)

In addition to the orchestra, the Alhambra Picture Palace had an organ, and shows were twice nightly, with matinees at 2.30pm.

The cinema was not purpose-built; it was a conversion of a warehouse. Whether this resulted in any particular difficulties is not known but, on 15th October 1914, just over a year after opening, the Alhambra Picture Palace closed and the managing company took over the Pavilion Cinema on the opposite side of Low Road. That had opened in January 1913 and had a larger seating capacity, at 820. (See separate Cinema Treasures entry.)

Initially returning to its original use, the Alhambra Picture Palace building became a munitions factory during World War I and subsequently a snooker hall, dance hall and in 1929 a roller skating rink. It is assumed it has long been demolished, as Low Road now forms part of the main A639 and much redevelopment has occurred to that area.