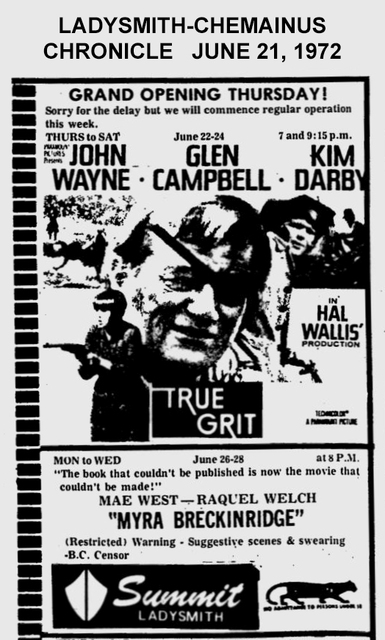 The Summit Theatre opened in downtown Ladysmith on June 22, 1972 with the John Wayne movie “True Grit”. It originally was to have opened on June 8 with the movie “The Cheyenne Social Club”, but an unexpected delay led to the theatre’s opening being pushed back by two weeks. The tiny theatre, which was opened in space formerly occupied by a women’s clothing store, seated 120. It was one of the first theatres that formed part of Terry Weir’s Caprice Showcase Theatres chain.

The Summit Theatre closed its doors on November 30, 1974 after just over two years in operation, citing a lack of business as its reason for closure. It has since been returned to its retail roots.