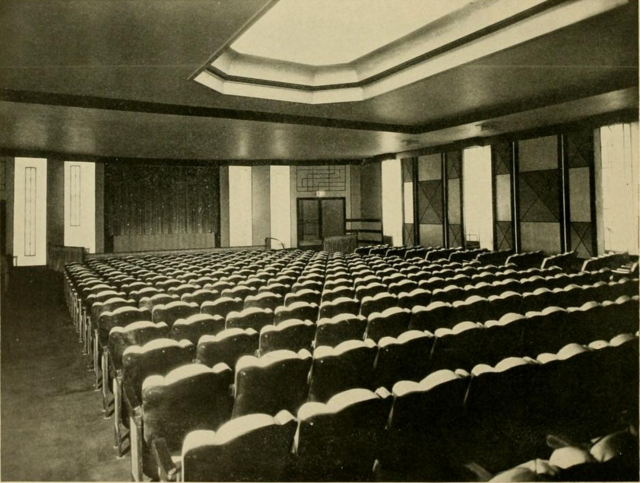 Opened on November 3, 1928 with “Ten Days That Shook the World”. The Little Carnegie Playhouse was for many decades one of the premiere art houses in Manhattan, along with the Paris Theatre, Beekman Theatre, Sutton Theatre, Plaza Theatre, Fine Arts Theatre and Baronet Theatre. It was designed in a ‘modern’ style by architect Wolfgang Hoffman. Located on W. 57th Street, adjacent to Carnegie Hall and the Russian Tea Room. It had a very sizable lobby and waiting area for a theatre its size, and the plush seats and everything about the theatre spelled Class…with a capital ‘C’.

It was remodeled in 1952 to the plans of architect John J. McNamara in a Streamline Moderne style. All seating was on a single sloping floor. The Little Carnegie Theatre was closed in April 1982. It is sorely missed.

It is not to be confused with the Carnegie Hall Cinema, which was around the corner on 7th Avenue.

It’s great to hear from someone who worked there. Can you tell us any more about John Wolgamot, please?

Micahel Mindlin’s fledgling circuit of theaters were anti-palace and frowned upon Hollywood mainstream fare. Starting a small cinema, art movement, Mindlin’s most important stake in the ground was the Carnegie “Junior”. Though Mindlin had theaters in Brooklyn, Rochester and Buffalo, the Carnegie was the most high profile.

The modernity of the original Carnegie “junior” upon opening in 1928 was reflected in the architecture of Wolfgang Hoffman, decoration of Pola Hoffman, and staging and design from Beatrice D. Mindlin, the Carnegie was a place not only to watch a film but to dance, play bridge, chess and ping pong, and for some period have a cocktail.

But within a year, new controlling operators sacked Mindlin who also would exit his other locations. While the art cinema movement would eventually catch on, Mindlin’s control was no longer in evidence.

If your an avid follower of this site you will find countless situations where policy has not been observed. Generally, however, all the options are listed so regardless of how you do the look up you’ll get what you want.

Reading about the New York premiere of Sergei Eisenstein’s “October: Ten Days That Shook the World,” Alfred Barr Jr. wrote in The Arts (Volume 13-14, p. 316) that the film opened at the Little Carnegie on November 2, 1928. Barr doesn’t mention whether there was a musical accompaniment to “Ten Days” – one of the last silent films – but one has to assume there was.

the last time I can remember seeing a film here
was the 40th anniversary re-issue of Disney’s
Pinocchio.

Any info on when the Walter Reade Organization began operating this theatre?

A theater that lasted until the waning days of the city when New York was New York. It is sorely missed. I remember waiting on the lines that would stretch east on 57th.

This became a Walter Reade location in October 1966.

The sidewalk canopy of this theater can be seen in the movie Tootsie during the scene where Dustin Hoffman & Sydney Pollack are standing outside of The Russian Tea Room. The film must have been shot right before the theater closed, as it was released in 1982.