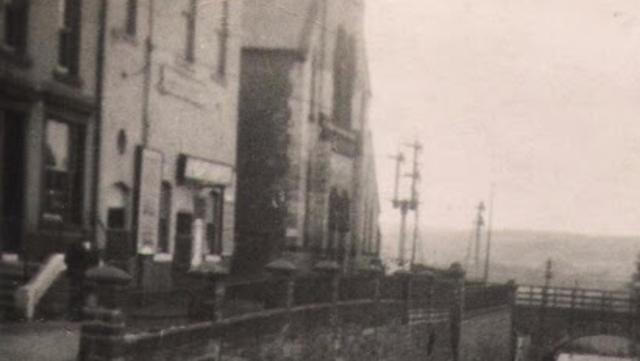 In Brotton, a village in North Yorkshire to the south of Redcar, it is not known when the Grand Picture House opened: it was not listed in the 1914 Kinematograph Year Book, but it was in the 1923 edition. According to that entry, it was owned by the Grand Picture House, Ball Room and Café Company Ltd, a rather cumbersome title that presumably explains all the amenities the Picture House had to offer. The resident manager was L. Priestley; there were two shows nightly on Monday and Saturday, and one the rest of the week. There were two changes of programme each week.

By the late-1920’s the Grand Cinema had been acquired by Thomas Lord and was advertising “Pictures and Occasional Variety”. The modest stage was 9ft deep and there were two dressing rooms.

Into the 1930’s an AWH sound system was installed. Later on, this was replaced by a British Thomson Houston(BTH) system, and the Grand Cinema was acquired by E. Goldstraw.

The final entry in the Kinematograph Year Books is in 1963, a rather abbreviated entry which suggests the Grand Cinema had closed a while ago.

Bingo took over until the early-1970’s. In October 1973 it was reported that “the conversion of the Grand Cinema into a public hall is nearing completion”. The council had purchased the building, and was paying for the conversion.

It is not clear how ‘dramatic’ that conversion was - because the Railway Arms public house currently stands on the site, and that is nothing like the Grand Cinema building! So it is unclear whether the pub is an adaptation of the public hall, or a new build. However, what does appear to be certain is that all traces of the former cinema have disappeared.