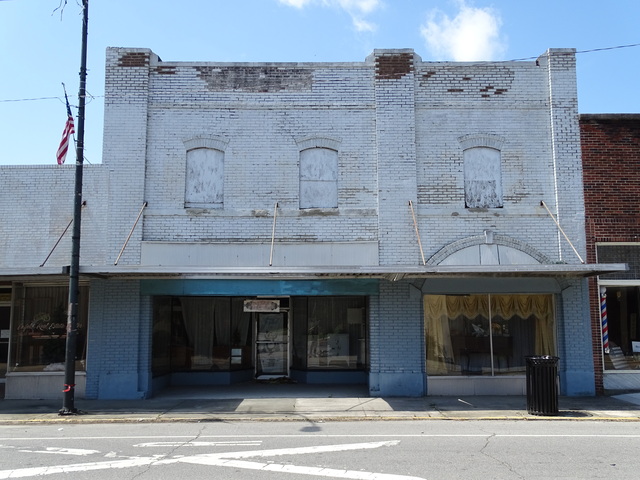 This was the 2nd location for the Grand Theatre which had previously occupied the former Opera House at 122 Whitfield Street (which has its own page on Cinema Treasures). Built between 1915 & 1921, the 1921 Sanborn shows ‘moving pictures’ in what was a purpose-built theatre. Although the façade is somewhat old-fashioned, it does not appear on the 1915 map.

The auditorium was a decent size, although a kink in the western wall, as well as the footprint of the barber shop in the small western storefront made a slightly awkward line to the rear wall. It was still operating as a movie theatre in 1927, but had closed by 1928.

There are no later maps to be found online, but at some point the little western storefront was closed off, and the theatre entrance was refitted with shop windows. This may have taken place around 1950, judging by the materials used.

It currently houses the remains of an antique store, and the building is rather worn.

The draft of the Enfield Historic District application form for the NRHP lists the extant building at 111-113 Whitfield Street as the Grand Theatre and describes it thus: “Constructed between 1915 and 1921, this two-story brick commercial building initially housed a moving picture theatre (later known as the Grand Theater) and a barber shop.” I’ve been unable to discover the opening name of this theater, but at some point it became the new location of the Grand, which was originally located in the former Opera House.

A PDF of the draft NRHP application can be downloaded from this link.