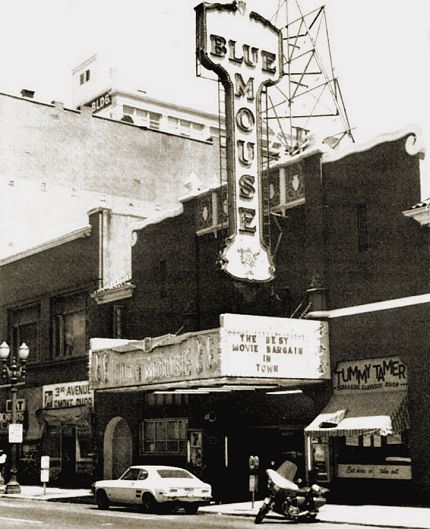 This partially excerpted story appeared as the article with the nifty title: “THE SAD DEMISE OF THE DESPONDENT RODENT” (get it? ‘DESPONDENT’=Blue, ‘RODENT’=Mouse) by Loren Shisler in Marquee magazine of the Theatre Historical Soc. in 3rd Qtr. Of 1977, along with six photos.

The Blue Mouse wasn’t an architectural jewel, though at the time of its opening as the Capitol in July of 1928 it did have a pleasant Spanish motif with the exterior, interior, and furnishings very well coordinated, and of excellent design. It was of about 850 seats with a small balcony.

In 1912, a rather pleasant and pleasing little theatre opened at 11th and Washington Streets in downtown Portland. The name of the theatre was the Globe. It was later taken over and completely remodeled by John Hamrick and opened as the Blue Mouse on November 28th, 1921. In each Northwest city, when the Hamrick chain came in and established themselves, their first house was always called the Blue Mouse. It is interesting to note the origin of the name. One story is that Mr. and Mrs. Hamrick were visiting in London where they attended a musical play titled “The Blue Mouse”. They were so entranced by the play that they thereafter named their theatres Blue Mouse. There was also a Shubert production of “The Blue Mouse”.

We now have the Blue Mouse launched on its career. The first sound picture in Portland was presented at the Blue Mouse in 1926: John Barrymore in “Don Juan”. About 1936, the Hamrick-Evergreen Theatres closed the original Blue Mouse and later in October of 1940 Mr. Paul Forsythe would re-open the theatre. He presented family films and kiddie matinees. He was rewarded with success and a host of good patrons, young and old who became loyal Blue Mouse fans.

In the meantime, the Capitol Theatre had gone through a period of second run pictures, then vaudeville acts, then an era of strip-tease. It is said that the famous stripper Tempest Storm once for a short time owned and operated the Capitol. The theatre had been closed for some time by 1958 when the original Blue Mouse faced eviction when the property was sold and the building was to be torn down. Mr. Forsythe then removed the “Blue Mouse” sign from the old house and moved it and his operation over to the Capitol in August of that year. There was, however, one great difference in the operation of the new Blue Mouse as compared to the old situation. Whereas the original Blue Mouse had been located Uptown quite close to a good middle class apartment district, his new Blue Mouse was downtown in a district of old, cheaper hotels and small businesses. Consequently, some policy changes were necessary. The staff became the ‘shepherd’ and confidant of literally hundreds of lonely souls and habitues of skid row. The theatre became ‘their’ theatre and they loved the staff that worked there and continued their support of the theatre for many years.

In 1977 the “Blue Mouse Block” was to make way for a huge parking facility. There was a faint outcry to “save the Blue Mouse” but even if it had been a mighty roar, it was to no more avail than the “Save the Fox” campaign was in San Francisco in 1963. So now the familiar Blue Mouse sign that had been part of the Portland scene for so long has come down in 1977, the building demolished, and the unusual name no longer is a part of the world of the movie theatre. It may never have been the “Mouse That Roared” (to borrow from the title of the Peter Sellers movie), but it did manage to please many and squeak by for many years.

I bet if you really explored you would have found them.To cut off the heating/air system at the Imperial one had to go under the stage and it looked just like a Boris Karloff movie down there.

Mike I went everywhere in this theatre,but I was not looking for rats or mice, I am sure we had them,I just did not see them.I did see rats down at Printers Alley that were as big a dogs,very scarey.Now back to the Blue Mouse not to be off topic.

If the tale told in the introduction that John Hamrick named this theater for the play “The Blue Mouse” is true, then a group of ministers and college professors in Ithaca, New York, would have been quite displeased. Here’s a brief story from The New York Times, February 14, 1909:[quote]“WOULD BAR ‘THE BLUE MOUSE.’
"Cornell Professors Say Play Will Have a Bad Influence on Students.

“ITHACA, N.Y., Feb. 14. — An effort will be made by several Cornell professors, backed by the local Ministers' Association, to prevent the performance of Clyde Fitch’s ‘The Blue Mouse,’ which is scheduled to be produced in this city tomorrow and Tuesday. E.H. Woodruff of the Cornell College of Law has interviewed the ministers and has obtained their co-operation. He charges that the play is immoral and that it will have a bad influence on the students and others who will attend.

“Mayor Horton says that, without formal complaint, he can do nothing, so that one performance is sure to be given.”[/quote]It was perhaps as much the reputation of Clyde Fitch, the playwright, as the play itself which had roused the ire of Ithaca’s self-appointed guardians of public morals. For those who may be interested, there is a biographical sketch of the scandalous Mr. Fitch, America’s first internationally famous playwright, about halfway down this web page.

I worked for several years in the late 1970’s in the Title and Trust Building a couple of blocks north of the Blue Mouse on Third Avenue at Stark Street. My favorite memory of the Blue Mouse was the lady who sold tickets. She was decidedly older (about my age now), blond, powdered, and always wearing evening attire no matter what the time of day. She seemed to be there all the time. She was so strange we called her “the Blue Mouse lady.” It seemed everyone knew of her. Does anyone else remember this person? Just another wonderful memory of Portland from the late 1970’s. Au revoir Blue Mouse and so many other wonderful places that are no more.

I do remember this lady and yes she was always there. I believe she spoke with a slight accent, didn’t she?

I loved this theatre. I visited this place several times. I started in 1946 or 47 I believe and later on. I was around 10 and eleven. I had to take a bus from Vanport city. We were all flooded out of Vanport City in 1948.

Blue mouse .25 cents the Round up theatre not too far was .15 cents. I am 81 living in Indiana now but at the end of this 2018 July returning to Portland for a 10 day visit with family there. I love and miss Portland.

Boxoffice, Sept. 10, 1955: “The Blue Mouse Theatre, a local entertainment center since 1912, is being razed to make way for a ra? garage to serve the adjoining new Medical Center. The three-story theatre was the scene of the showing of Portland’s first talking picture.”

This entry is a real mess. It has information on two completely different theaters at different addresses.