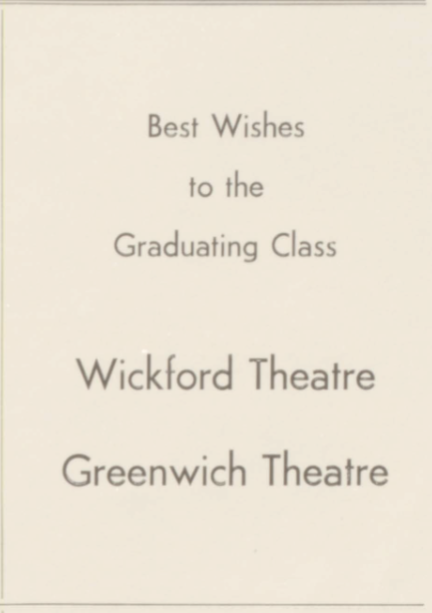 The Wickford Theatre was used both for theatrical productions and for movies (newspaper ads from the 1940’s list movie programs). For decades the shingled country-barn style building has been used for other purposes and is now an antique shop.

A 1914 City Directory refers to a Miller Mathewson Hall (moving pictures) in North Kingstown. I wonder if this was the same place.

The 1949 Film Daily Yearbook gives the seating capacity as 265.

FYI.. the shop is known as the “Old Theatre Store”.

Does anyone know where someone might find the origial blueprints for The Old Theatre ( i.e. floor plan, seating charts, etc)?

Theatre in Wickford Closed by Stanzler

PROVIDENCE. —-The 37-year-old Wickford Theatre in nearby Wickford has closed for good after a two-year battle for survival. Up until two years ago, the Wickford operated seven nights a week, but since then it has operated only on weekends.

Manager Guy E. Renfro blamed television for the recent closing. but Meyer Stanzler, lessor of the Wickford in a prepared statement, denied that TV was responsible, claiming that his theatre could not stand the competition of the Quonset naval base theatre, which offers a 15-cent rate to defense workers.

Quonset authorities, however, denied that defense workers were allowed in the base theatre. They insisted that admission is granted only to servicemen. Stanzler denies that this is true and claims he can furnish proof to substantiate his claims.

It is for sale!

You can see from http://www.sbcwickford.org/history/history.html that it appears the Wickford Theatre is the old Odd Fellows Hall while the Mathewson Hall was on Brown Street.