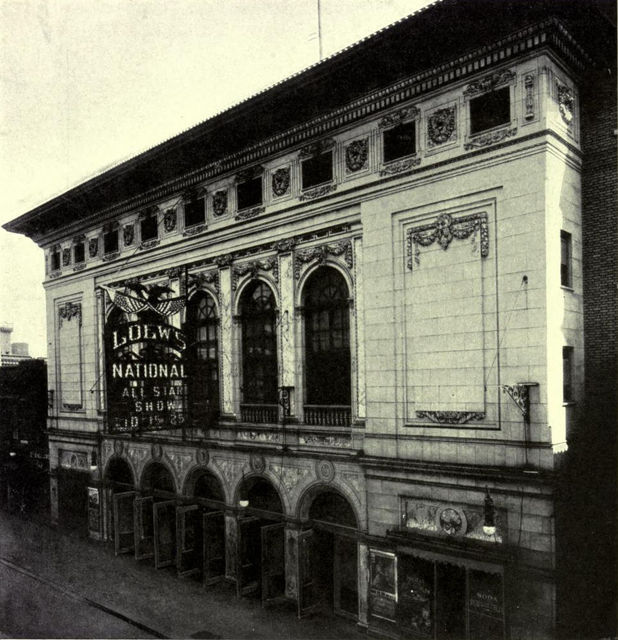 The Loew’s National Theatre is claimed to be the very first theatre that Marcus Loew built himself, after starting his circuit by acquiring a number of existing properties in Manhattan, Brooklyn and the Bronx. The name was a message to the entertainment business that Loew’s intended to become a national circuit, and it did. The Loew’s National Theatre was designed by the architectural firm of Neville & Bagge, with H. Craig Severance as consultant, and first opened in September, 1910, with vaudeville the primary attraction and movies shown only as fillers.

With white marble frontage and a gorgeous Beaux-Arts auditorium, the Loew’s National Theatre was one of the largest theatres built in the Bronx up to that time. The movies were first-run for the borough until 1929, when Loew’s gave that exclusive privilege to their newly-opened Loew’s Paradise Theatre and shifted the Loew’s National Theatre and its other Bronx theatres to playing the same programs two weeks later.

The Loew’s National Theatre was one of the longest lasting of the Loew’s Bronx theatres. In its final years it was operated by an independent operator as the National Theatre, until its closure in July 1974 and was eventually demolished. As far as I know, it was never sub-divided.

The site was a 24 hour parking lot until 2018. In 2019 construction work began on a new commercial development on the site, which was scheduled for completion in summer of 2020.

It closed as a Loew’s single screen operation in 1971.

I’m very interested to see the address given above for this theatre as 570 Bergen Avenue, because the information I had said the address was 500 Bergen Avenue. I spent many hours walking around that area trying to identify the location so I could take a “now” pic to go with the “then” pic on my web page (scroll half-way down):
View link

That original marquee made it all the way to 1971.

In 1974 the National was still open as an independant.
View link

I would venture that the location of this theater was the east side of Bergen Avenue just south of the intersection with Westchester Avenue. A parking lot now occupies most of this block front from Westchester Avenue and down along Bergen approximately 2/3 of the way to the corner of E 149th Street. The E 149th Street corner is occupied by a vacant and overgrown lot. Department of Buildings records indicate a Certificate of Occupancy was issued on July 26, 1985, for a “public parking lot for 74 private passenger cars” at 570 Bergen Avenue.

The street view above faces the opposite side of Bergen Avenue, down the block near E 149th – south of the theater’s site. The correct view can be obtained by turning around to the right and heading north about half a block.