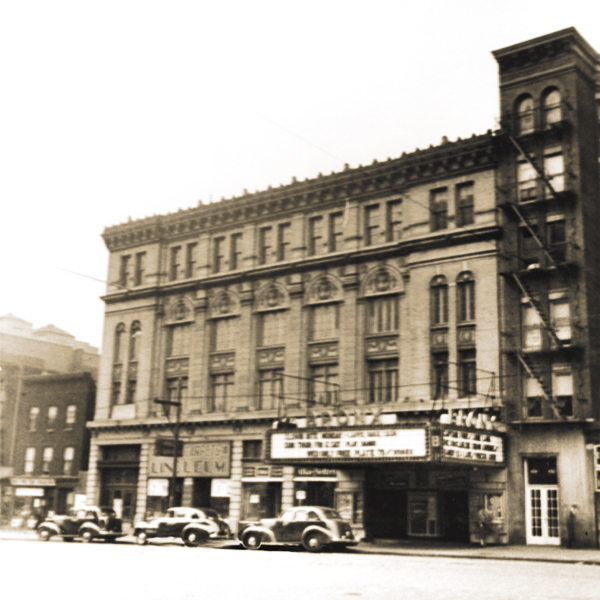 When first opened in August, 1913, the Bronx Opera House was considered the most beautiful theatre in the borough. The auditorium had two separate balconies, and was dominated by a huge crystal chandelier hanging from the center of the ceiling. The stage opening was 62 feet wide, but as far as I know, operas were never performed there. For many years, the theatre presented only vaudeville and plays, including a long run as part of the so-called “Subway Circuit”.

By the 1940’s, it had become a late-run movie house, with the name simplified to Bronx Theatre. The seating capacity was reduced to 1,400 by shutting down the top balcony. By 1950 it was operated by Liggett-Florin Booking Service. The theatre eventually fell victim to the overall decline of the South Bronx.

In the 1980’s, plans were announced to restore and re-open it as a performing arts center that would help to rejuvenate the area, but that never happened. In 2004, the dilapidated auditorium was being used for a Spanish evangelical church. By late-2010, the church had moved out and the auditorium has been razed. A boutique hotel was built on the site, using the front part of the building as its entrance, and it opened in August 2013.

On a recent visit, we discovered that the office building seems to be in the process to be converted into an hotel. Unfortunately, the auditorium has just recently been demolished.

Wasn’t there another Bronx Theater at Melrose Avenue and East 151st Street that was opened by Keith in 1909? Does anyone know anything about this theater? I believe I located a 1909 article describing some of it’s interior decorations. (“Trenton Advances Ceramic Interests to Extent Never Before Approached in U.S.” in the Trenton Evening Times, Sept. 7, 1909, p. 1)

This building is indeed being converted in to 3 star boutique hotel. Complete details available at this link:

Except for the facade, there doesn’t appear to be any of the interior left to save though the history of its former life will part of the interior decoration of the new hotel property.

The Bronx Opera House Hotel is Now Open! It is the first luxury hotel to open in the borough and it is astounding that it has opened in the South Bronx, a neighborhood that epitomized all that was wrong with urban America in the 70’s and 80’s. The city of New York has truly blossomed and all the boroughs are enjoying an incredible renaissance.

Lived on 148th street behind the Bronx Opera House. Used to play ball on the back wall in 1946 to 1950. In my day, it never was a first run movie house so it was cheep compared to the local RKOs and Lowes. Neither was it an Opera House. Had no stage shows. I was around 14 years old and used to sneak into the adult section, get all the way down in my seat and smoke. Seldom got caught by the Matron.

A very detailed history with illustrations can be found here

My grandfather Louis Casavant was in a play at Bronx theatre “The Green Beetle"as See Yup December 1st,1913.