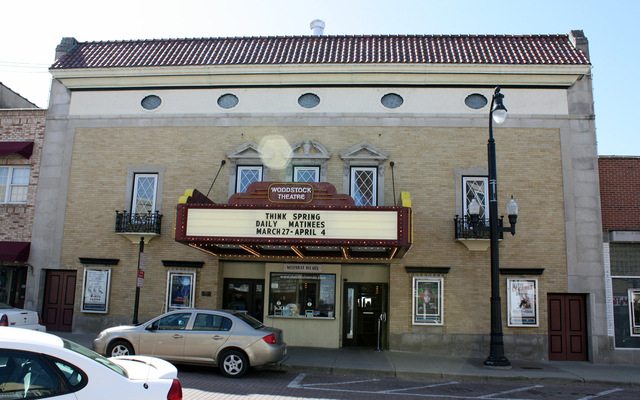 The Miller Theatre was built in 1927 on the site of the Princess Theatre and had a seating capacity of 1,000. It opened November 8, 1927 with a mixed movies/vaudeville policy and was equipped with a Barton style-23 theatre organ which had 6Ranks.

It was re-named Woodstock Dollarodeon Theatre in 1976 and was twinned in 1979. Classic Cinemas then acquired the Woodstock Theatre in 1988. In late-1991 a new marquee was created to resemble a historic marquee.

The theatre has undergone various renovations which have returned it to much of its original charm. In May 2002, two additional screens were added in the building next door, which had previously been the long closed, 1912 built, Beverley Theatre. In August 2012 three buildings on Main Street were demolished, and the following month work began so that in 2013 the Woodstock Theatre will have eight auditoriums including restoration of the historic auditorium complete with its domed ceiling.

One of the highlights of the theatre’s history was the filming of “Groundhog Day”. Each year the theatre helps the City of Woodstock celebrate ‘Groundhog Day’ with free screenings of the movie.

As in 2002 the Woodstock Theatre expanded into the building that was once occupied by the Beverly Theatre, at 211 Main Street, shouldn’t the name Beverly be listed as an aka?

A document prepared for the Woodstock Historic Preservation Commission (PDF here) has a history of the theaters in Woodstock. The Beverly Theatre opened in 1920, and occupied the building that had been occupied by the first Princess Theatre, so maybe Princess should also be an aka.

The second Princess Theatre, which was demolished in 1927 to make way for the Miller Theatre, had been built in 1913 and opened that year as the Palace Theatre. The Princess moved into the 429-seat building some time later. The document says that the building was demolished:

“In 1927, John Miller demolished the second Princess Theater along with the E.J. Field Hardware store that was located between the two theaters and a new, larger theater was constructed.”

However, as the Palace/second Princess Theatre building was only 14 years old in 1927, I think it’s possible that it was not entirely demolished. It was not unknown for theater buildings to be expanded sideways in those days, and I suspect that it might have happened in this case, although I’ve found no historic documentation that this was done. It was usually more economical to leave at least part of a sound structure standing, and I wouldn’t be surprised if at least the north wall of the Woodstock Theatre turned out to be a remnant of the old Palace.

This opened as Dollarodeon on June 18th, 1976. Its grand opening ad can be found in the photo section for this theatre.

I’ve Been To The Classic Cinemas Woodstock Theatre A Few Years Ago To See “Finding Dory” In 2016, And It Has 8 Screens When I Went There. I Actually Don’t Know Why They Decreased It To 4 For Something Unorganizable. There Are TV Screens With Dasani/Coca-Cola/Coke/Diet Coca-Cola And A Few Others When I Went To The Ticket Booth With Pictures Of Classic Movie Posters From The 30s/40s On The Walls. I Also Remember Watching A Coca-Cola Commercial During The Intermission Including A Trivia With A Yellow Background And The Classic Cinemas Logo Somewhere On The Screen. The Rest Of It Is Unknown Inside My Memory Bank.

The Miller Theatre Was Named After Ms. Helen Miller, Mr. John C. Miller and Mrs. John C. Miller. When The Theater Opened, The Main Theater Had Organist Of Barton Studios And An Organ Broadcaster Off Of Chicago’s WLS-AM Al Malgard, Who Played His Barton 23-Styled And 6 Rank Organ For A Half-Hour Before The Opening Of Their First Program On 35mm. The First Program Is Beljean’s 11-Piece Band (With Unknown Origination) Playing The National Anthem, Or The Star Spangled Banner With The Camera Showing The US Flag.

After The Anthem Ended, The Camera Continued To Show The Flag Fluttering In The Breeze As The Band Played “My Country Tis Of Thee” After A Moment Of Silence. The Theater Opened With A Gala Event And “A Festive Occasion For Woodstock And Vicinity” And Was Known To Be The Biggest Event For The City Of Woodstock And All Of McHenry County. Although I Can’t Find It First Attraction. I’ll Keep Looking Soon.