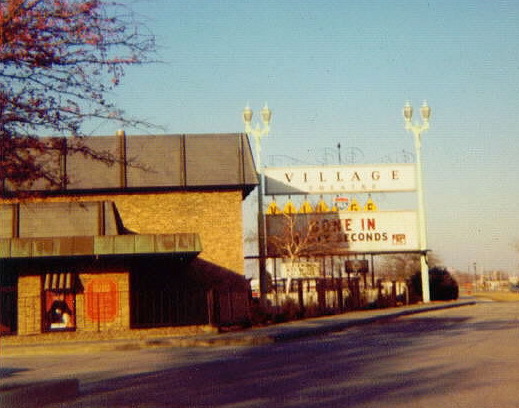 A very striking building built in all dark red and black brick and and black overhang all around the theatre. The interior of the theatre was lined with wallpaper with a red velvet pattern running all through it. It was a great theatre and did a fair share of the business even on its last day.

Several facts wrong here…I don’t claim to know everything, but I’ll share what I’m positive about:

Village Square did not open in 1984. I don’t know exactly when it opened, but I remember seeing ads for it in the newspapers in the 1970s. It was a 3-screener as early as 1976, and possibly even before that. I don’t know exactly when it went to 6 screens, but it was never run by Wehrenberg. When Mid-America went under, the theater became part of RKO-MidAmerica around 1984. A short time later (1986, I believe), whatever RKO theaters were left were bought by AMC. Village Square became a dollar show somewhere around this time and flourished. I went there with my friends many times on a Saturday night and that place was jumping!! The line would go all the way around the theater. AMC tried to have Village Square show first run movies at a first run price around 1990, but changed it back to a dollar show after only a few months. I believe Village Square stayed as a discount house until it was closed in 2001 and demolished in 2002 (source: cinematour.com)

And in case anyone is wondering, the Village Square Shopping Center is at Lindbergh and I-270, not far from Boeing (formerly McDonnell Douglas, where I used to work).

I second Kyle’s comments. The first time I went to this theatre was in 1981…3 years before Mr. Van Bibber’s inaccurate opening date above.

It was always a Mid-America/RKO/AMC and never a Wehrenberg.

The expansion to three auditoriums took place in October 1980. According to Variety the additions seated 600 and 400 respectively.

The opening of six-screen re-configuration was in June 1985.

The first movie I recall seeing there was Return of the Jedi, in May of 1983. The last movie I saw there was Sgt Bilko, in early 1996.