Previously operated by: B & B Theatres, Dubinsky Brothers 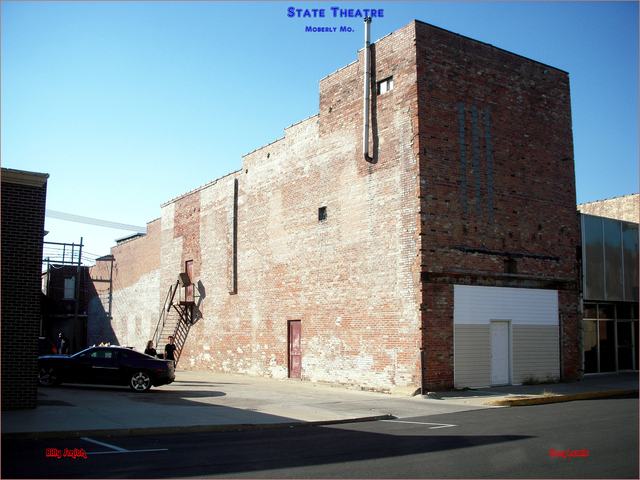 Another old small town movie palace that opened in 1922 and seated 702. Not as big or elaborate as the Halloran Theatre around the corner but beautiful just the same. It was a rather narrow building but seated 300 in the balcony and 402 on the main floor. It was remodeled on July 25, 1946 when it reopened as the Sonsa Theatre. In November 1949 it was renamed Sate Theatre. The two story front was lined with beige and red-brown enameled metal panels and three sets of narrow windows lined with glass blocks that ran from near the top of the building to the top of the marquee. The marquee was round and had STATE in red neon on each side.

The interior was nice but again no where near as elaborate at the Halloran Theatre. The walls were lined with a tapestry material and the floors up to the carpeting was the same white marble as the front of the theatre. The auditorium had a small stage and proscenium with red velvet drapes over the screen. When the theatre closed all the marble was removed from the front of the building. Today the theatre sits stripped down to its red brick and boarded up tight.

MOBERLY, MO.-The Sosna State, 209 North Fourth St., has been reopened after 4 ½ years of darkness by Louis M. Sosna, owner of the building. Sosna plans to complete a thorough remodeling and redecoration program, which includes installing a wide screen and bringing projection equipment up to date.

Sosna leased the State in November 1949 to the Dubinsky Circuit and moved his family to San Diego, where they resided until last month. Sosna expressed confidence in the future of Moberly and the theater business, saying “We have returned because we believe Moberly is on the way up. We plan to operate the State like we did in the good old days, with popular prices and strictly first-run releases”.

The November 12, 1949, issue of Boxoffice reported that Mr. and Mrs. Lewis Sosna had leased their Sosna Theatre at Moberly to the Dubinsky Brothers chain, but it also said that they “…had entered the theatre busines here in 1936, and the present Sosna Theatre was opened in July, 1946.” So the Sosna/State was their second theater in Moberly. If the aka’s given as CinemaTour are correct, the first Sosna in Moberly was the house currently listed at Cinema Tresures as the Princess.

I’d guess the name State was chosen by the Dubinskys because it’s the same length as Sosna and shares two letters in common, simplifying (and making less costly) the changing of name on the marquee.

Boxoffice of February 4, 1950, reported that the Sosna Theatre in Moberly had reopened as the State Theatre.

Two years after Louis Sosna returned to Moberly and reopened the house, Boxoffice of January 15, 1962, reported thet the Sosna State Theatre had been acquired by Elmer Bills.

If this house was built in 1922, as the introduction currently says, then it must have had at least one aka that is currently missing. Boxoffice gives no clues as to what it might have been.

Spent many nights watching movies at the State while I was a teacher in Madison during the 70’s. The state was not fancy, but had the better movies. Moberly was fortunate to be able to support 2 downtown theaters and a drive in all at the same time.

I loved the State. I saw many films there when I was younger. Every Which Way But Loose, The Cannonball Run, Halloween 2, My Bodyguard…more than I can recall. The State in its latter days closed off the balcony and added a second screen. Sometimes you could show up on a weeknight and have the place to yourself. I thought of it as my private theater. We actually got a better variety of films back when the State and 4th Street Theaters were all we had because the State would get in smaller films and b movies—the sort of thing that play Art Theaters in bigger cities. It was run down and dirty, but it was old and good, too, like the evil twin of the magnificent 4th Street Theater a block away. I miss the old theaters terribly. It wasn’t a fair trade for the massively inferior, characterless, and chintzy Five and Drive.

The front was not marble. Either Chuck was confused, or maybe it had marble when it was built. The 1949 remodel was beige and red-brown enameled metal panels. I doubt it had marble inside. The building is being worked on, and the interior looks like your standard plaster, where there’s anything still on the brick at all. Not sure how much is due to the interior demolition the crew was doing when I walked by, but the interior is in very poor shape, the balcony frame is bare at the back, and only a tiny bit of the lobby walls were still plastered. The screen must have been pretty small, the roof steps down quite a bit toward the rear.

Sorry, typo for the remodel date. I imagine it must have been about 1946, when it ‘opened’ according to the article. It’s clear from looking at the brick that the entire front of the building was removed and replaced. Also, those windows are not stained glass, it’s glass block, and there are three strips, not four.

I think Chuck was badly confused about this theater, and suggest the description be changed.

Flickr member Darren Snow posted this photo of the Sosna State Theatre taken in 1997, shortly after the house closed. The caption says the panels on the facade were Vitrolite, which was a pigmented glass tile, sometimes generically called vitreous marble.

The Vitrolite brand was introduced in 1908 by the Vitrolite Company, and was later made by Libby-Owens-Ford from 1935 to 1947. Popular during both the Art Deco and Streamline Modern periods, Vitrolite and its chief competitor, Carrara Glass, are once again hot items, with vintage tiles being quickly snatched up for use in architectural restorations and by collectors.

You can tell that it isn’t vitrolite. Look at the seams between the panels (notice the corners are slightly rounded), and all the rust.

It looks like there are rust streaks below the three vertical black panels, but the rest of it just looks like dirt.

Those aren’t black panels, they’re glass block, which obviously doesn’t rust. I’ve never seen vitrolite way up on the facade get dirt all over it. In addition, doing that small ‘tower’ on the right in vitrolite would have been almost impossible. Again, notice the rounded corners, and the thickness of the panels. Nobody made vitrolite like that. Finally, notice that in the pictures after it was removed, there were no gobs of epoxy left all over the brick, like there should have been with vitrolite.