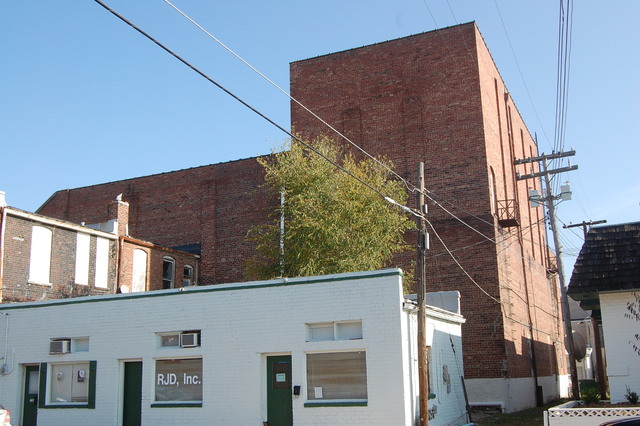 Opened December 14, 1903 as the Halloran Theatre seating 826. In 1913, it was renamed Grand Theatre. It was designed by the Boller Brothers. It seated 302 in the balcony and 524 on the main floor. It was remodeled in 1952 and a lot of the artwork was covered over or painted over. It had Corinthian columns down both sides of the auditorium walls, a large arched proscenium around the stage with red velvet draperies covering the stage. The seats were a plush red velvet that matched the stage curtains.

The theatre closed in 1960 and was converted to a J.C. Penny store. The store is still open today.

The Grand closed on February 9, 1960, according to the Moberley Monitor-Index. A.H. Pekarek, manager since May 1957, was transferred to the Jayhawk Theater in Topeka, KS.

This theater opened in 1903 as the Halloran and was renamed the Grand in 1913. It suffered a fire in 1914, was rebuilt, then burned again in 1925 and was rebuilt yet again, with plans again by Boller Brothers. The history of the theater was recounted in a February 29, 1960, Boxoffice article about the closing.

The article says that A.H. Pekarek had been manager of the Grand since 1927, but that was a typo. His appointment to the Grand was noted in Boxoffice of June 22, 1957. The latter article calls the house the Fox Grand, as does one 1939 Boxoffice item. The rest of the time Boxoffice just calls it the Grand.

Given that the theater at this location was called the Halloran Theatre for only ten years, from 1903 until 1913, and the Grand Theater from 1913 until closing in 1960, it ought to be listed as the Grand Theatre.

On the 1909 Sanborn, the entire area taken up by the ugly modern storefront is empty. The theater is set back nearly half the depth of the neighboring buildings, and starts abruptly at the two-story auditorium. The balcony is a deep horseshoe extending nearly to the stage. It’s unclear where the entrance is, although there appears to be an exterior staircase on the 5th St side behind the store next door.

On the 1916 Sanborn, 2-story storefronts have filled the empty space, and there is a long, wide entrance hall in the center going back to the auditorium. Narrow exit hallways are at either side, flanking the storefronts (which are a confectionery and tailor at this point). Seating capacity is 1,050, and on each side of the balcony the front has been replaced by a pair of boxes.

On Feb. 19, 1960, BoxOffice ran what was effectively an obituary for the Grand:

MOBEKLY, MO.—The Grand Theatre, constructed nearly 60 years ago, soon will enter a new phase of its existence. Fox Midwest of Kansas City closed the theatre this month and the structure will be remodeled, starting March 1, for use by J. C. Penney Co. as a department store.

The passing of the Grand leaves this town with only one theatre, plus a drive-in. At one time, Moberly had four theatres, two playing first-run film.

Penney plans to spend $100,000 on the conversion. The history of the Grand dates back to Dec. 14, 1903, when it was opened as the Halloran Theatre by Patrick Halloran with the stage show “Peggy From Paris” as the attraction. It ran for two nights. Seats on the opening night sold at $5 to $10 and reservations were by drawing.

In 1906 Halloran took in two partners, J. B. Price and Charles E. Breeding of Hannibal, Mo. They incorporated as the Halloran Theatre Company. In 1913 the theatre was sold to George W. Sparks, whose son owns the present building.

Sparks in 1913 leased the building to Fred Corbett and Jack Truitt and they changed the name to the Grand Theatre. They operated originally as a vaudeville house but later changed to silent motion pictures. The building was swept by fire in 1914 but was rebuilt by Sparks, again being leased to Corbett and Truitt.

A second fire in 1925 destroyed the building. It was reconstructed and this time was leased to the Sears Amusement Co., a subsidiary of Universal Pictures Co. This lease subsequently was assigned to various other interests and finally to the Fox Midwest, which has had it about 30 years.

A. H. Pekarek, manager of the Grand since May 1927, was transferred to the Jayhawk in Topeka, effective February 12, and Gene Kincaid, manager of the Kennedy in Kirksville, was moved in to supervise removal of equipment and other final details. Pekarek, who has been with the circuit 25 years, returned to the same theatre where he started as a doorman. Mrs. Pekarek’s parents live in Topeka.