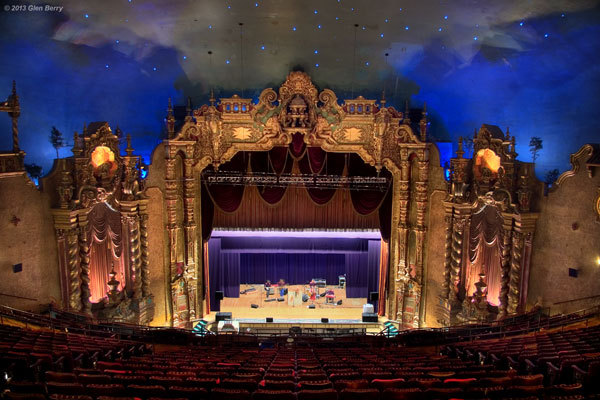 When it opened on May 8, 1928 it featured vaudeville performer Rae Samuels (Blue Streak of Vaudeville). The Keith-Albee building had cost $2 million to erect, and the theatre seated 2,720. The theatre’s main floor held 1,520 people, and its massive balcony held 1,200. The theatre was equipped with a Wurlitzer 3 manual 13 ranks theatre organ, which was removed in the 1950’s.

In the 1960’s two screens were added inside the auditorium and in the 1970’s a fourth screen was added in former retail space. A fire was just one of many challenges the movie palace has faced over the years, including a flood in 1937, mounting financial problems, and the wear and tear of time.

One of the last Keith-Albee Theatre’s in the country, this palatial theatre reopened in May 2001, after a three-month restoration of the main auditorium to repair damage from a fire that broke out next door to the theatre. In 2001 a 1927 Wurlitzer 2 manual 7 ranks theatre organ was installed in the theatre which had originally been installed in the Granada Theatre, Bluefield, WV. It was closed as a movie theatre in January 2006, due to competition from a newly opened multiplex cinema. In 2018 the original Wurlitzer organ was found and re-installed as a 3 manual 19 ranks instrument, with the replacement instrument having been returned to the Granada Theatre, Bluefield, WV. in 2015.

Now that the $400,000 restoration of 2006 is completed, the Keith-Albee Theatre is back in business and better than ever as a performing arts center. Recently in September 2008, work began to remove the two mini-theatres inside the original auditorium. Further renovation continues in 2015.

There is a pic in this morning’s Herald-Dispatch showing the Sign at night. Check it out.

The night time picture has been posted. Check out the Photos section.

I met a fellow in Charleston yesterday – who told that years ago, the ceilings in the K-A had been created so that there was a presentation of the night time stars for the patrons as they watched their films. He also said that there were some nice illusions of the setting of the sun – with fading orange and yellow light. I have not seen these effects myself. Has anyone seen these illusions in better days of K-A life? Are they still there?

I guess I have a personal interest in presentations of the night time stars – I enjoy the excitement of it all – and hearing the wows when people see such things for the first time. The child like excitement never gets old for me. A Painter of Dreams Link

Tinseltones: Thank goodness the theater has been preserved for the moment. It has a great look but still needs quite a bit of work.

RQ: There are stars in the night-time Spanish Courtyard. I wish the illusions to the setting sun were still available, but alass, the machines were probably stolen in the 1970s. The lamp houses are still there, but are in bad shape at the moment.

Lots of new updated renovation information in this article: http://www.stamfordadvocate.com/news/article/Effort-underway-to-restore-Huntington-s-5989040.php

Overall it will be a $16,000,000 project; over 1 million recently done including marquee, new roof, etc. Are doing a couple major fundraisers to allow them to proceed to the next steps. The theatre’s new official website is http://www.keithalbee.com/

From their website, information on the upcoming 2016-17 renovations and info on the original and current organs:

“Originally, the Keith-Albee was equipped with a Wurlitzer organ to accompany live performances and motion pictures. The organ was capable of creating almost any sound effect needed for silent films shown in theatres of the day. In 1950, the organ was sold and removed from the Keith-Albee. Huntington resident Robert Edmunds and his Huntington Theatre Organ Project, Inc. took on the project of replacing the organ. Thankfully as a result of significant efforts, a 1927 Wurlitzer organ, originally in the Granada Theatre in Bluefield, WV, was purchased and installed in the Keith-Albee in 2001. In 2009, the original Keith-Albee Wurlitzer became available and is currently being reinstalled in the theatre, and the Granada Theatre organ has been relocated to its original home.”

“Projects that are in the process are restoration of the heating and cooling system (2016), seating (2016-2017), 4 dressing rooms (2015-2016) and women’s restrooms to begin the spring of 2016. Through community involvement work has begun to recreate the original carpet. KAPAC will have the carpet reproduced and installed. Several other projects are under development, such as the electrical system upgrade, restoration of the furnishings, rear façade repairs and restorations, restoration of the dressing room towers and basement, and finally the restoration of the plaster and painting of the theatre. All projects will be funded through public funding and private donations.”

Do not recall any subdivision of the main theater until the 70’s. I saw Buddy Rich perform there in early ‘71. (or maybe late 70?). At that time, the entire main theater and balcony were open. It was a beautiful theater. Also went to Marshall’s “Young People’s Concert” there a few times.

Link to article from the May 7th, 2018 Herald-Dispatch newspaper about the Keith-Albee turning 90 years old.